#012 Root - The Temple in the Underworld

Root have been around for a long time. As long as most of the second wave of black metal, and longer than many. They have a very unique sound, which I would describe as a refined and tuneful interpretation of black metal, with what Encyclopedia Metallum describes as "Dark epic-metal" thrown in. Their third studio album, released back in the mists of 1992, is typical of this style. 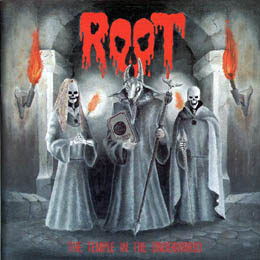 I had the feeling I'd stumbled across something amazing the moment I put on a song from this album. That song was "Aposiopesis" A slow, heavy, but hypnotic song, with vocals like some sort of brutal lullaby. The vocals are certainly what sets the band apart from other Black-metal of the time, as these vocals are, often, substantially cleaner and more tuneful, which, in this case, suits the music perfectly.

But don't let the comparatively soft nature of some of the songs fool you. Root can also produce fast, technical, and extremely heavy works, for example the eight-minute epic "The Wall" which should by all rights be a black metal classic, with excellent playing, in Roots own unique style. As well as hitting all the right buttons in black metal, with it's length and rhythm styles, it also seems to have something of a groove to it, something comparatively rare in black metal, but Root carry it off well, creating an extremely listenable yet very heavy piece.


I have few criticisms of this record, however, one thing which is noticeable is the fairly simple arrangements of many of the tracks. this alone is no problem to me, as simplicity can be, and is, beautiful, however anyone looking for the immense degree of technical prowess present in many Black metal bands may find themselves a little disappointed.

This album was released in the same year as Burzum's eponymous Debut, and two years before Mayhem's "De-Mysteriis Dom Sathanas". It deserves equal fame and praise.