#008 Toxic holocaust - An Overdose of Death

Toxic Holocaust are one of what a few years ago would have been referred to as one of the "new" Thrash bands. however, time flies, and Toxic Holocuast are growing their discography somewhat.

Playing traditional thrash metal, of a style somewhere between Venom, Bathory and Slayer, The band truly plays to it's strengths in "An Overdose of Death", with every song being a thousand mile-per-hour mosh-causing composition, even if some of them are incredibly short and sweet. 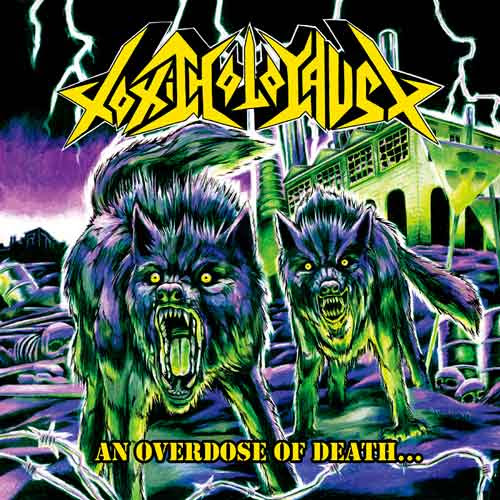 Although mostly active within the last decade, Toxic holocaust play very much quintessential thrash metal. Overdose is no exception, with songs such as "Future shock" and "Death from Above" having a strong tint of the Golden-age of thrash, in the 1980's, with chugging riffs, blistering speed, and comfortingly familiar arrangement. I'm certain, had the band formed fifteen years earlier, Some of the songs on the album would be regarded as thrash classics.

The  playing and production in the album is spot on with regards to encapsulating thrash at it's best, with raw sounding, but undisputably tight production values, although these would be nothing withoug the bands razor-sharp playing.


Short songs are often a thrash staple, and with Toxic holocaust, this is no exception. The longest song on the album is 4:50, while the shortest is a mere 0:59. I could imagine this being a bit of an issue for those who like more beefy songs, as many seem to be finished before they have got going.

Another slight problem, in my eyes at least, is the deficiency of solos. This is somewhat forgivable, as the band is a three-piece, however, a few solos certainly wouldn't go amiss, with some of the songs seeming to have perfect spots to put them in.

Thrash-junkie that I am, I give this album 8/10