I discovered Dark Forest - the UK heavy metal band, and not the other one - at some point last year, if memory serves me. Immediately, I was quite impressed by their earnest, gritty approach traditional metal, and I listened to their first two records with gusto, and both of which exuded the promise of great potential to come. Earlier this year, I noticed that they had released a third. Nobody, however, should underestimate my ability to see a new album by a band I enjoy, mutter "ooh, awesome" and then spend the next three months not listening to it. Now, fortunately enough, I have finally gotten around to listening to "The Awakening", and with a few spins spun, it's review time. 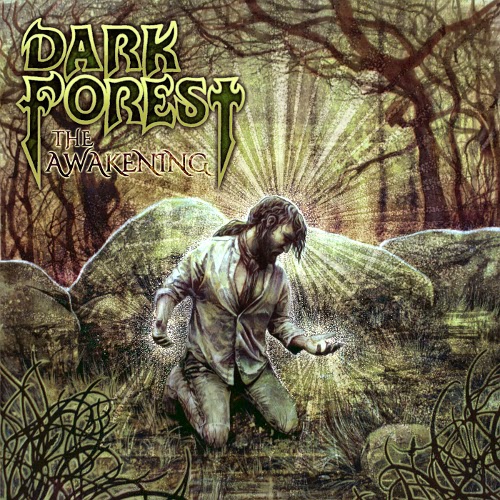 Since Dark Forest last released an album, they've had a few line-up changes, including a change of vocalist, which can often be the change when it comes to a band. As a first impression of the current line-up, The Awakening does an exceptionally good job, and allows me to use a phrase I've been storing up especially: The album sounds like a mature release by the band. The first two albums showed a steady ascension, and The Awakening carries on this trend, but genuinely seems to take the band's sound and go somewhere else with it... somewhere lofty indeed. The Self Titled, and Dawn of Infinity were both largely understandable as conventional traditional metal records; they did what they set out to do, and that was to deliver the sort of heavy metal which is rough, reliable, and comfortably familiar sounding. This new one, on the other hand, retains the uncompromising heavy-metal heart, but definitely ventures into more grandiose, more fluid, and more sonically indulgent territory. The new vocalist is certainly one of the features which bring this to attention, with thick, well-measured vocals in the style of classic Fates Warning, and Dark Forest's overseas label-mates Atlantean Kodex. The singing is skilled, warm vocals which impress - and absolutely entrench the vocal lines in the listeners memory - but likewise spare the listener much of traditional metal's accustomed "virtuoso" pomposity and foppishness, giving them something of a sincerity; the vocals deliver precisely what they should, in their context.

I don't know if the band's leap forwards can - or should - be chalked up to one feature, however. The Awakening seems to be one of those albums; the musicianship, the song-writing, the tone, the production - everything has ascended a level from where the band were before; every instrument is played, to my ear, the best it ever has been played, and the song-writing has truly leapt into overdrive, hewing tracks which, for want of a better word, are epic - although sharing a label with Atlantean Kodex will definitely do that to you. Regardless, the record is thick and lustrous, a heavy metal record which genuinely feels full, with glorious crescendos, fantastic melodies and solos which are earnest, rather than gratuitous. It's sonically vibrant, complete, and really feels like an album with direction. The songs, in tandem, feel like an album, as opposed to the trap which many bands fall into, of having collections of songs which are just that; a pile of songs. The Awakening feels well thought out, the tracks nestled where they belong. Certainly, the record keeps you listening for the whole of its length, with great ease. At risk of being one of those awful people who work the album's title into the review they're writing of it, this record very much feels like an Awakening* of the band's true glory.


I'm often blown away by records, and at times one has to be very careful when reviewing them, on that basis. It's easy to heap praise on a record for a day or two, before putting it on the shelf and forgetting all about it. However, I have the distinct feeling that the quality of this record is genuine and tangible, and when the dust falls to earth in terms of my impression, I'll still hold this record in high regard - heck, it wouldn't astonish me if this was one of the best traditional metal records of 2014, and certainly Dark Forest's best yet.