When it comes to metal - or music in general, when I'm feeling adventurous - I like to have a shot at listening to everything. When I notice an oversight in my listening, I tend to attempt to undo it. One band I've recently been aware of as one I've barely listened to before, despite being aware of the band for many years is Behemoth. I think that's probably a solid sign that  it's about time that I sat down and listened to some of their work. When I dip into a band for the first time like this, picking which album to start with tends to be a difficult task; especially with a band with a career as varied as Behemoth's. For this review, I'm going to be looking at Evangelion, for one reason; It is the record which I looked at for some minutes in a shop about six years ago, and then didn't buy; it seems an apt starting point. 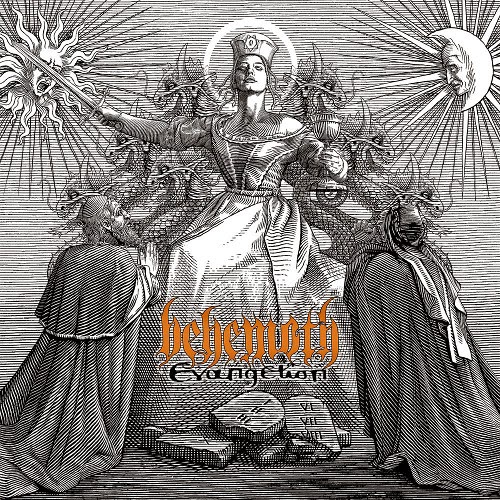 The sound which Behemoth employ in their relatively recent work both is, and is not what I expected. I'd always painted the band in my mind as an - if not the - archetypical blackened death metal band. However, this record, and some of the others I sampled around it, much more typify modern, somewhat more pure death-metal. Indeed, the record, pleasingly, feels reminiscent of bands like Vader, also a product of the Polish scene. Nonetheless, an after-taste of black-metal remains even at this stage of the bands move towards the death-metal paradigm, creating an album which has a succulence and grandiose leaning, with enough scathing and atmospheric character to be very digestible, and thus, it comes as no surprise to me that Behemoth often seem to be one of the formative bands in an individuals experience of extreme metal. Evangelion has a lot of intensity, but a controlled, extremely tightly-played intensity which is energetic and destructive, but also very accessible, with a focus which some bands would forsake for sheer heaviness. Evangelion seldom offers a wall of noise, instead invoking a clarity both in terms of song-writing, dexterous playing, and production. At every moment, you can very easily detect what everything in the mix is doing, which is very pleasant to listen to - after all, being well produced and being over-produced are very different things, and Behemoth seem to adopt only the former here, to their credit.

Evangelion has a lot of character as a record; identity and painstakingly careful writing practically ooze out of it, subverting any worries of the band having "big band syndrome" with many bands of Behemoth's stature sinking to create bland, over-produced records which sell in spite of themselves. Behemoth are quite the opposite; well paced, intricate, and above all still attentive; being a name on the lips of almost every metal fan can have a detrimental effect on some, but not Behemoth, it seems. I'm actually a little taken-by-surprise how much I immediately found myself enjoying Behemoth's musical aesthetic - often, if I've known of a band for years and still not listened to them much, there's a reason for it, concious or otherwise. In this instance, however, it must simply be the case that I genuinely made a mistake - perhaps it's because it has taken me a lot longer to enjoy death metal than any of the other genres of extreme metal which has delayed the process. Perhaps I've made the age-old mistake of conflating "well known" with "not good". Regardless, I've developed something of a new found appreciation for the band's sound; not so much "blackened-death-metal" per se - I'm not sure albums like Evangelion can be described quite in those terms, but what I'd describe as death metal which has been rinsed in black-metal, to great effect; death metal teeth with black-metal mouthwash. The music is deeper, more profound, and better written than I expected it to be. An utterly pleasing surprise.


I'm already looking forward to listening to more of Behemoth's work - and there is a lot of it to work through, but first impressions are very positive indeed. Naive to metal as I might seem by only discovering them about six years into a metal "career", it nonetheless perhaps allows me to see the band in different light - regardless, the band are more interesting than many might give them credit for. I always tend, it seems, to be someone who goes about listening to metal the "wrong way round", but at the end of it all, a good band is a good band, and Behemoth succeed to impress.