I can never quite decide where Mayhem fit into the grand scheme of my musical taste. Sometimes, I feel that my listening was saturated by their music all too soon, as I listened to them a lot when I was getting into black-metal. At other times, I look upon them as a band which I legitimately under-appreciate; I can't remember, for instance, the last time I really sat and listened to one of their classics; De Mysteriis Dom Sathanas, namely - instead constantly leaning towards other albums by their peers, much in the way that I haven't listened to an album like Master of Puppets in years, despite its massive status. Nonetheless, I can certainly be considered interested when Mayhem announce a new album, and Esoteric Warfare, their first in seven years, is the first time that Mayhem have infiltrated the top-tier of my musical attention in quite a while. 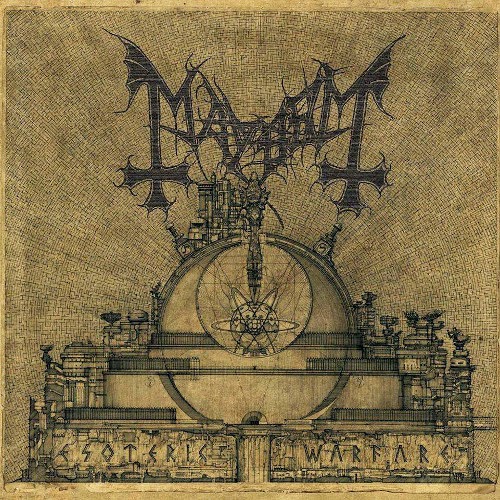 The opening notes of the album set the tone for the rest very concisely. Dissonant, cataclysmic and oppressive - cold, inorganic, seeping unforgiving nihilism like so much radioactive waste. The artwork for the record genuinely paints a picture - pardon the pun - of the album's sound in this respect; it is black-metal infused with cold, metallic ominousness; music not of forests and mountains, but of bunkers, and the secluded work of nuclear armament. The record is immensely foreboding and hostile. Esoteric Warfare represents a progression of this style, which the band seem to have landed upon in its predecessor, Ordo Ad Chao. Despite being quite inspired, that album was a challenging listen owing to its production, which, deliberate or not, rendered the album a "well organised collection of rumbles" - the music demanded an almost exceptional amount of scrutiny and careful listening to glean pleasure from it. Esoteric Warfare retains the atmosphere for which Ordo Ad Chao was most praised, whilst having room to breathe; you can hear what's going on much more easily, which is a godsend. Granted, the murk remains, but much more carefully measured, and induced not by production, but by the musicianship itself, with a wall of harsh, mechanical noise punctuated by screeching, squealing guitar dissonance, like a tumble through the bowls of some vast industrial complex, made all the more harrowing and engaging by the records unapologetic quirky structure, with pauses and bursts of energy which jerk the music around ferociously, placed at times, where you don't expect them at all.

Over the top of this assault, Attila delivers a typically absorbing vocal-performance, roaring, screaming, and delivering his trademark low, growling chants. His vocal approach is one which very much suits the direction in which the record heads - a traditional black-metal vocalist would have felt out of place on this, which is, after all, certainly not a traditional black-metal record - Attila's style compliments it perfectly. Indeed, Esoteric Warfare is a prime example of the fact that Mayhem have never made the same record twice; even with its similarities to Ordo Ad Chao in mind, the record, in its uncoiling, reveals itself to be a very different beast. Granted, this ever changing style leaves Mayhem as a band who possess no sure "string" of classics in the way that many of their peers do - instead leaving each album as an island, but likewise, it's almost impossible to deny that, for better or worse, Mayhem have never created a record which wasn't interesting, and this one is no exception - in fact, it feels among their best formed and most sonically rewarding works in a long time. At the moment, I'm tempted to weigh-it-in as being their best work since De Mysteriis Dom Sathanas, although I'm going to wait until the initial elevated mood of listening to a new album subsides before I call in such a judgement for good. Nevertheless, Esoteric Warfare is the first Mayhem album which has deeply impressed me upon discovering it, the only other being the Deathcrush EP - both of which I listened to and was impressed above and beyond the normal mental-hubbub of listening to a record.


Of course Mayhem haven't made "De Mysteriis Dom Sathanas - Part II" - and I think for the most part hoping for such is naive, and even closed minded. Why should Mayhem create a record in the old style? A style which they helped to pioneer, but which has since, nonetheless, been adopted by a multitude of bands. It's worth remembering that at the time, Mayhem were creating something which very, very few were creating - and in this respect, this record harkens back to that; it is very different from their early work, musically, of course, but it is a return to the creation of music which very few others are creating, and it is within that sphere which the band seem to thrive. It's very clear, at this point, that Mayhem are a band who are creating the music which they want to create, and when records like Esoteric Warfare are delivered to us, we can be very glad of that indeed.