Now to indulge in another band which I was requested to review some time ago - it was about six months ago that Greek thrash band Immoral Hazard sent me a message asking me to review their début full-length record "Convulsion". Now, finally, I've gotten around to listening to it. As a general rule, if a band request a review and I write one at all, they've already met a minimum-requirement of quality - there are some which I sample and never review at all. The rest, fortunately, get done eventually, or, ideally so. Regardless, time to dive into ten tracks of modern thrash-laced material... 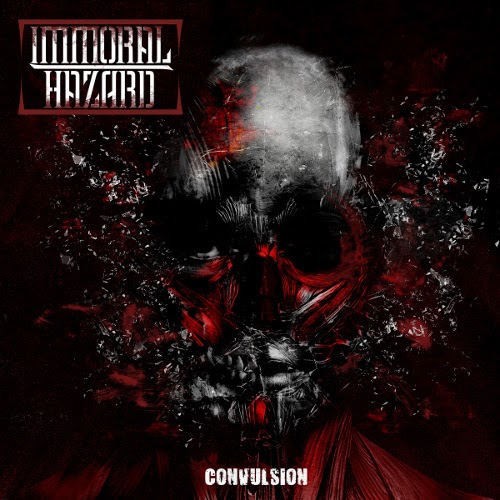 The character of the entire Convulsion album is immediately made clear in the first few tracks - unashamedly modern. There are a few "flavours" of thrash out there at the moment; the retro-thrash style of the thrash revival, the more old-school and underground variety thereof, and the various others which ebb and flow; black-thrash, crossover, and so forth. The style into which Immoral Hazard fit is different from these however; it's the style of thrash which seems to crop up everywhere, spawning naturally when musicians get together and mingle groove-metal, metalcore and thrash together all at once, to create what I can only describe as... "modern metal" - informed by the intermingling of many of metal's more mainstream elements since the mid-nineties. Indeed, the style which Immoral Hazard play is the sort which a lot of bands have been playing since the early 2000s. Nonetheless, the frequency with which bands like this come into existence is not grounds to dismiss their work - and believe me, such work can range from pleasantly reasonable right through to nauseatingly abysmal; the work of terminally local bands. Fortunately, however, Immoral Hazard work well with this style, playing it tastefully and making the songs not only memorable, but giving them enough character to avoid sounding utterly generic - although simultaneously, there is no denying that the sound which the band have is one which has been very thoroughly done previously. Happily, the album does manage to spring the occasional unexpected twist, however.

One of the notable strengths of the album is how "properly done" it feels. For a début - and by an unsigned band - the production is very tight, as is the playing. Everything is relatively well captured, and very competently played by the musicians, including a few riffs and solos which arose from the bubbling cauldron as being especially tasty. The record is a little bit sterile in places with regards to drum sound, but also quite forgiveable; this is not an album in an old-school paradigm, but instead has a thoroughly modern direction musically, in tandem with this production. It's not supposed to sound like the eighties, it is, instead, a good showcase of what the relevant fields of metal have been doing in the mean-time - there are riffs influenced by thrash, but plenty more besides; groove metal seeps into a lot of the record, and there are breakdowns and plentiful riffs inspired by the heavier, slightly more acceptable side of metalcore - the sort which can survive as something of a guilty pleasure, as opposed to the other school of metalcore, that which is best not dwelt on. Convulsion certainly manages to live up to its title, succeeding in being swaggering, energetic and at times explosive. Perhaps not the style of metal which, overall, I'm best suited to in terms of my personal taste, but credit is definitely due the band for their skill and song-writing.


Granted, I really do try to be honest in my reviews, and for all that it offers, metal of this sort generally isn't the sort of thing which I listen to. Regardless, I'm just one person, one reviewer, and I think it's probably great praise of the band to say that I can think of dozens of people I know who would greatly enjoy a record like this. Indeed, even I; a real asshole when it comes to music taste sometimes, am willing to let my guard down a little and consider this record pleasingly solid.