Something like five bloody months ago I was sent a link to a download of this album, and asked to write a review of it. As ever, when I take a long time to get around to reviewing something, I tend to start the review with an apology for such. Nonetheless, I usually mean to get around to writing reviews as soon as I can, which is something I've been failing to do so far this year, sadly. To attempt to remedy this, I'm going to proceed, in the next few weeks, to catch up on the queue of bands who have asked me to review their material, blending such reviews into my usual rambling about whatever other records cross my path. Today, I'm taking a look at Swedish black-metal outfit Neglektum, and their début full-length, Blasphemer. 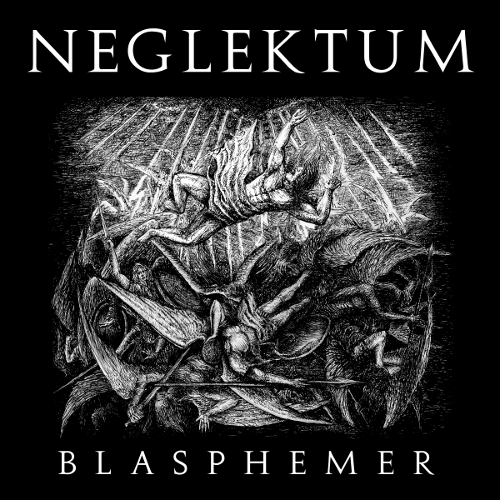 Blasphemer is a dynamic album, immediately rejecting the possibility of being dominated by blast-beats, norsecore style. Instead, it travels through a range of tempos and styles, with angular, spine-crawling riffs and a definite ear for atmosphere. The mid-tempo sections, especially, evoke a particularly dark and chaotic edge, of the style which bands like Ondskapt and early Watain made known, and it is certainly bands like those two, and perhaps to an extent Funeral Mist, with whom I can make the most comparison. The difference, perhaps, is that Neglektum seem to seek to make their sound richer, and lusher still than the lucid, fluid black metal which typifies the bands similar to them. Blasphemer sounds extremely full, and the production, tone and playing all unite to create a very suitable atmosphere, especially in terms of guitar-work, which has a fantastically frozen, cutting tone, with the right level of regal, occult majesty meeting the frigid but tonally wealthy chromatic attack. The guitars are, frankly, spot on. In fact, production wise, the only thing which stands-out as being slightly at-odds with the feel of the record is the drum sound, which has been rendered slightly too neat, tidy and pristine; you can hear every drum beat, cymbal hit and so forth, but at times they seem to refuse to interact sonically with the rest of the mix, gliding over the top slightly obtrusively - albeit nowhere near so badly as to genuinely harm the record much - it wouldn't surprise me if the drums were played on an electric-kit, or possibly even programmed, but regardless, they are enjoyable musically, and better drum-production could further enhance this sound.

It's good, on the other hand, to hear a black metal album which genuinely sounds - and intends to sound - evil in this day and age. The multitudinous directions which the genre has taken - atmospheric, folk-infused, progressive, dissonant, and dozens more - are wondrous to behold, but likewise, often leave me craving some no-nonsense evil music, and Neglektum very much deliver that; spiralling, resplendent evil, rising from the pit, striding proudly to the creation and ruination of worlds, evoked through blistering guitar work, crushing vocals which are roared with malice, and some truly excellent crescendos, including well-deployed solos; rising above and beyond the call of convention at times. Indeed, while they possess quite a conventional sound in the grand scheme of the genre, it is a sound which the band work with sufficiently well to create something which does not feel tired or overused; there are plenty of original and inventive tremolo sections, and sturdy, well written structures, giving the record an enjoyable blend of the familiar, but twisted slightly, as to remain interesting, as opposed to being "yet another" black metal album. Instead, the record is a strong - very strong - declaration of black-metal's vitality, and a statement of  the band's ability to create a ferocious, rich, atmospheric and above all engagingly energetic black metal record.


Once again, I apologise that it has taken me so long to get around to reviewing this record. On a positive note, however, I have found it to be an enjoyable and very impressive record to listen to. Ultimately, when I'm sent an album to listen to and review, there are two end results; the first is that I listen to it, review it, and then delete the folder... the second is that I keep the album to enjoy again and again. Blasphemer is definitely an album I will keep - it's really quite good.