It took me a long time to discover Celtic Frost - and even longer than that to come to enjoy Celtic Frost. Early Celtic Frost, that is. The band's later - and final - work, Monotheist, was an album which, to quite an extent, and for quite some time, I didn't fully understand, and for that same reason, it took me even longer to appreciate the style which it developed which, ultimately, now lives on in Triptykon. However, over the past few months, I've begun to cherish an appreciation, both of Monotheist, and of Triptykon, and where before I misunderstood the purpose and aim of the records, it seems that now, I've equipped myself with what's necessary to enjoy them. It is only proper, that being the case, that I now attempt to review the new Triptykon record, Melana Chasmata. 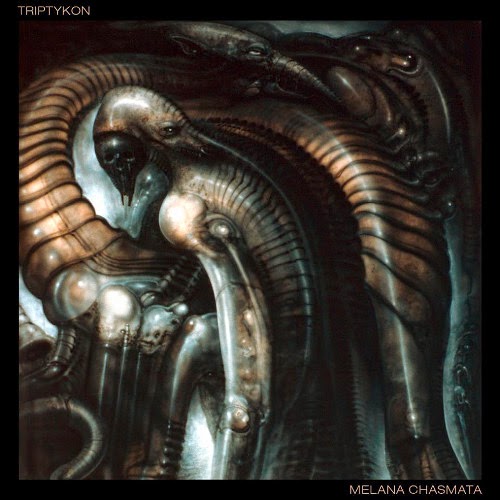 It's not always easy to talk about Triptykon without talking about Celtic Frost as well, and I've already opened that door fairly thoroughly above. However, I think it's important to refer to it in order to understand where the identity of Triptykon comes from. The ways in which Celtic Frost were most influential are, by my reckoning, not fully congruent with the bands aim, per se. The inspiration to a great deal of death, black and extreme metal with records like Morbid Tales and To Mega Therion is certainly the band's legacy, but one often gets the impression that Tom G Warrior aspired to create something bolder, larger, and more grandiose than those records. Triptykon, in my view, is precisely that vision being realised - with huge, expansive behemoths of records picking up where Monotheist left of, to finally reach for the territory which, by my reckoning, Tom G Warrior has always tended towards. Either way, Melana Chasmata resembles its predecessor; a monolithic great swathe of music; crushingly heavy, unique, and wildly experimental at times, the record justifies all of it's near seventy-minute run time with ease. The Giger artwork, the rich, thunderous and brooding atmosphere, the whole thing resultant of the union of its elements sounds apocalyptic, and indulgently complete.

Musically, which is something I really aught to focus on before I get side-tracked by history, Melana Chasmata greets us with that unmistakable Tom G Warrior guitar tone, and riff style; at times reminiscent of even the old Celtic Frost, but shrouded in atmosphere, as we are lead through energetic sections, doomy and brooding sections, and everything in-between. The style which Triptykon seems to have settled on is among the most crushing, and distinct, approaches to metal around, and the whole record carries on where the last left off. However, it's not "more of the same" in a pejorative sense - I'm certainly not tired of the style, and I think I vouch for many when I say that. Instead, the "more of the same" feels more like a "plenty more where that came from" - an assertion and a promise, not a threat. In fact, a clear effort has gone into making the records sequential - part of a set. I wouldn't be at all surprised if Triptykon maintain, perhaps while evolving, the same aesthetic for their duration, indeed, the album feels good for it, giving the band a purposeful, thematically consistent air which few bands maintain. The whole album uncoils over a tense, expressive running-time, at once hypnotic, ferocious, profound and evocative. It's the sort of album in which the listener can truly bask; become lost - even found again, as it washes through the speakers. It traverses everything from the intimate, soft and personal sections, right through to reverberating, wall-crumbling chords, ringing-in some vast, cosmic upheaval.


It's good timing... perhaps good may not be the word... but fortunate timing on my part to get into Triptykon in the run up to a new record. Just as Eparistera Daimones left me hoping to hear more, Melana Chasmata arrived and truly delivered - to my ear, it is every bit as good as its predecessor, leaving us with the question which we must all decide for ourselves... that is, how good is that? For me, the answer is very. I think I can safely say that I'm fully converted to Triptykon now.