Evening ladies and gentlemen, it's been a while - as ever, longer than I'd like. People think it's frustrating to have more to do than you have time in which to do it. Clearly, these people have never experiences the related problem of having plenty of time in which to do things, and still not getting them done. Regardless, it's about time I got another review done, and this time, we're turning our ears towards 1982's "Death Penalty" - Début full length effort by Witchfinder General, and a hugely influential early doom record, which, as with almost all records ever, I was really late to the party about. 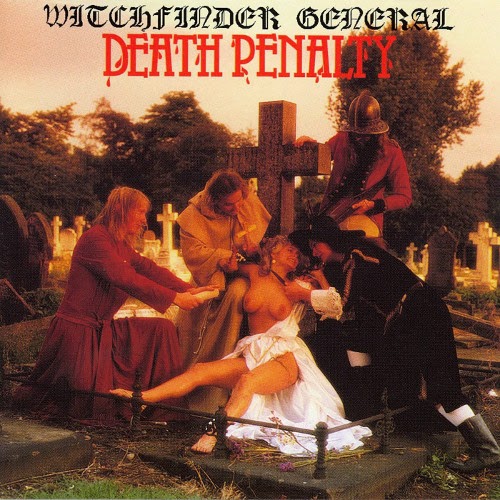 Doom, as we know it today, has its roots in various places, but bands which brought close traditional and doom metal in the eighties - Witchfinder General being a very good example of such - are definitely a cornerstone in the genre's evolution. Deeper, more cavernous, and at times considerably more slow than many of their contemporaries in the at the time flourishing NWOBHM, Witchfinder General were something a bit different to the normal fair, and it shows. The vocals and riffs sit as a missing link between the instantly recognisable Black Sabbath sound (and, for that matter, instantly recognisable Black Sabbath influence upon Witchfinder General's sound) and the even more narcotic, rumbling tendencies which archetypical doom metal has come to have. As an album, Death Penalty has, for it's early appearance within the genre, many of the hallmarks of a doom metal record, leaping fully formed out of 1982. The guitar tone is thick and heavy, with satisfying crunch and sustain, differing from the treble-hungry sounds which were emerging at the time around the metal scene. Likewise, the vocals very much aspire to the hazy, Ozzy influenced sound which doom bands have been striving to make more and more strung-out and moderately crazed sounding ever since. In this record, they sit in the middle-ground, possessed with the same eerie charm as many of Ozzy's trademark vocal parts with Black Sabbath, while likewise having a echo and reverberating psychedelia to them which, for want of a better phrase, really boosts their doom.

It might, however, be a mistake to consider Death Penalty - or the work of the band more generally - as simply conforming neatly to the stereotypes of the genre; there's more to it than that. The record pushes the envelope, particularly in terms of energy, going above and beyond the traditional call of duty when it comes to the genre's tempo... indeed, a lot of the record is played in a range of speeds more familiar within the traditional metal circle. Or course, it is perhaps wrong to assume that doom has to be slow, and as opposed to, as I saw some arguing, Death Penalty not being a doom record. I prefer to interpret the record as one showing that, akin to tracks such as Pentagram's Sign of the Wolf, doom can be quite a nippy, speedy genre. This swifter, more agile element of doom, as far as I'm concerned, is very much one which is neglected in the modern doom scene, and by all accounts should come back... indeed, if it has, let me know. I digress. As a less overly analytic take on the record, the best thing to focus on is probably something complementary to the riff-work; when I first discovered the band, my mind was somewhat blown by the riffs which the band had managed to conjure - every bit as dripping with spine-curling, hazy goodness as the other greats of the genre; Black Sabbath, Saint Vitus, Pentagram, and so forth. The record is a schooling in early doom, and one of the definitive examples of  mid-tempo doom riffs being used well.


Witchfinder General were very much the sort of band which I, upon discovering their work, saw them as another piece of the giant jigsaw puzzle of metal. Probably one of the important edge-bits which need to go in first, at that. As ever, it's hypocritical perhaps for me to consider any band which I've only just discovered as being "essential"... but likewise, as ever, I fall back on a disclaimer; just because it's hypocritical, doesn't mean it isn't right. Do it for the riffs.