This review requires me to talk about USPM. I'm not very good at it, and damn-it I don't know anything like as much about it as I should about it. Let that stand as a brief disclaimer before I leap more wholly into this review; it is a disclaimer which, indeed, might be best placed at the start of every review I write. If you ever catch yourself thinking that you're nearing the summit of metal... think again; there's plenty upward-more slope on the other side of that horizon, and this is proved to me time and time again. There will always be more bands to hear, more excitement, more discovery... and if you lose the will to discover more bands, perhaps you've lost touch with one of the most beautiful things about music. Regardless, it's time to review some Fates Warning, more specifically one of their longstanding mid-eighties classics, Awaken the Guardian. 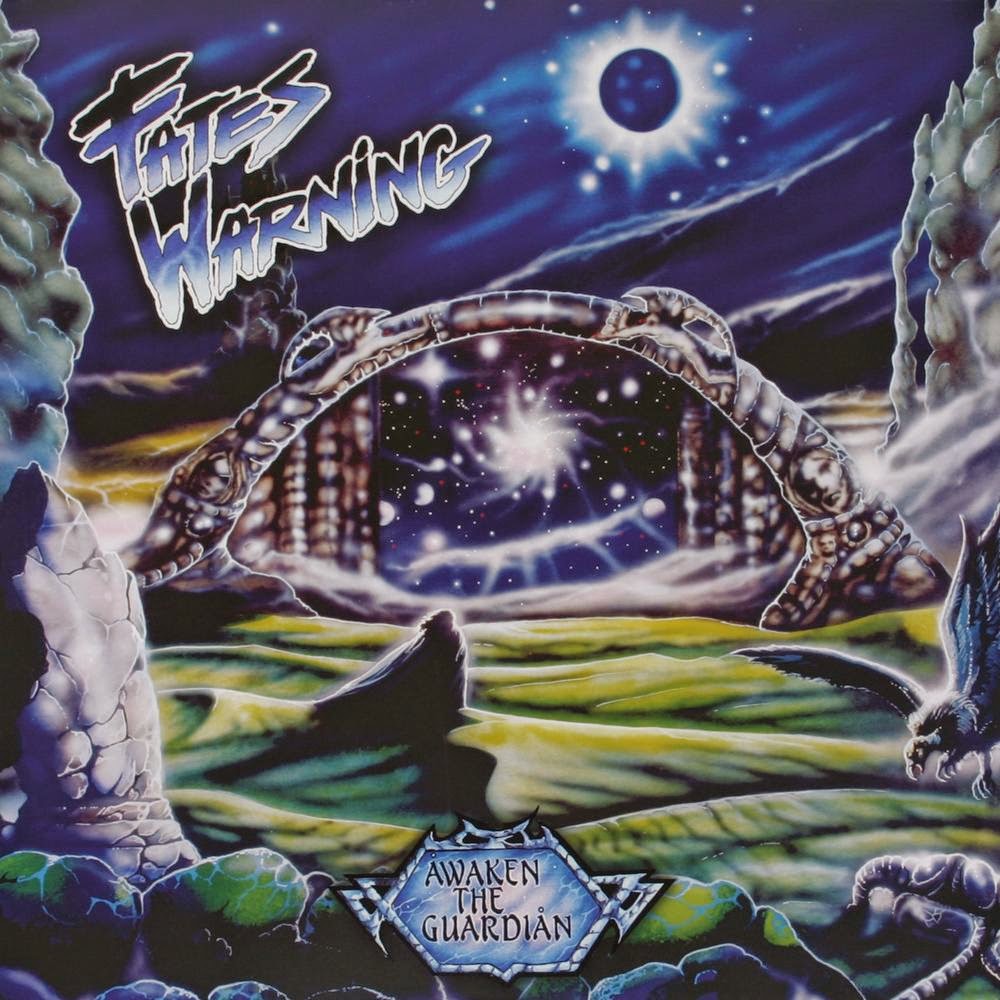 If I'm not mistaken - which I say as a genuine hope, as opposed to any kind of assertion - Fates Warning fits among the USPM (United States power metal) scene somewhere-or-other. I'm not sure where exactly, but for now, never mind - the band also slots comfortably under the umbrella term of traditional metal, for our purposes. It can be easy, especially for the neophyte first embarking on the venture of traditional-metal, to inevitably ignore many of America's contributions to the genre, but to do so, as records like Awaken the Guardian show beyond all doubt, is a sad omission indeed.The album represents heavy metal at it's most grandiose and, in a phrase which may sound inherently contradictory, wholesomely pompous - it's not a record which holds back, and the atmosphere and dramatic sound is overt - few albums to this day come close to the glorious, rich and inventive sound which this one possesses - a sound which, more to the point, is inventive without interpreting the word as meaning "gratuitously unusual" - quite the opposite - Awaken the Guardian brings together a progressive element which laces the songs with an unpredictable but not outputting edge, while simultaneously the band cling to the coast of conventional metal enough to keep the warm welcome laid-out for the listener to enjoy - I have often said that the job of a good hook, lick or melody is to give the listener pleasure by being roughly what they would expect - but the best ones are ones which offer the listener new things to expect the next time around - and this album brings enough of those along for everyone.

The songs - in terms of riffs, leads and vocal structures, can only be commended for this ability to surprise and reassure at the same time, flowing smoothly but uniquely forth, with effective buildups, and , juxtaposing, equally effective surprises seeded throughout the entire record. Indeed, speaking of vocal structures, (something which the band are especially innovative with), some of the best choruses I've ever heard make an appearance on this record - the glorious crescendo of "Guardian", to name names, is a rush of breathtaking intensity, beauty, and memorability. Moments like that really exemplify the uplifting glory and virtuoso playing on the record, and the second of these points is definitely one worth remarking on; There is not a single musician on the record who doesn't know exactly what they're doing when it comes to playing, and this fact echoes in how the overall sound of the album - this is music made by very, very skilled people, from the dexterous, thoughtfully written - and played - guitars, right through to the genuinely impressive vocals and percussion, which blends being impressive and augmenting the songs, with likewise being unobtrusive on the other aspects of the music - a perfect mixture, and one which stands at the helm of a record which truly asserts it's uniqueness and classic status with every track, not a single one of which goes wrong. Awaken the Guardian is a record which scarcely ever put so much as a finger out of place, and you can really feel that when you listen.


Awaken The Guardian is heralded by a huge number of metal fans as a classic, but is, likewise definitely one destined to be more obscure than some of its peers - Too progressive and unpredictable, perhaps, for the true mainstream, it serves the role, in my collection at least, of being that record you're really glad that you took the gamble with. Every listen makes me enjoy it more - and it is the sort of record which you need to listen to a couple of times to appreciate, but I can testify that if you have a taste like mine, you'll be glad you did.