On the back of one of my metal vests, I chose to emblazon the lyrics; "Gather 'round all you Fire Starters! Whirlwind Reapers and Comet Riders!" in bright yellow paint. As that might suggest, I'm a huge fan of Destroyer 666 - and I would have reviewed one of their records a lot sooner if I hadn't thought I already did so... but no. It turns out I just had "Unchain the Wolves" as the song of the week a few months ago, and I've actually never visited a Destroyer 666 record with a full review. As a reviewer, in fact, something I really do tend to neglect is talking about albums I've listened to for a lot longer than I've intended to review them. I often, discover bands in the name of finding something to review, but less often these days do I review bands I already love. Time to change that, with Cold Steel... For an Iron Age. 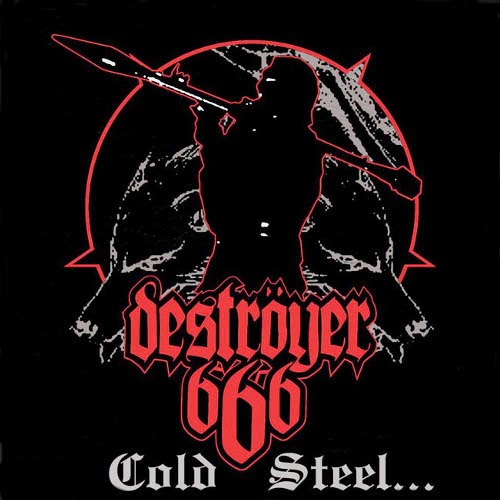 Describing exactly what it is that Destroyer 666 do on Cold Steel... is a task which is much more difficult than you might imagine it to be; the band have always been quick to forsake the conventions of every genre - black, thrash, death, speed - into which their tendrils creep, and especially so in their later work. Earlier records like Unchain the Wolves seem, upon reflection, quite distant stylistically to this, the form which that early style eventually mutated into. Cold Steel... represents the band's material at it's most battle-hardened, militant and weaponized - the guitar tone is thick and powerful, and the relatively clean production succeeds in casting the songs in a vicious, but equally retaining the natural savagery by steering away from being a clinical production job - the energy is truly captured, and part of the secret to the songs being so thoroughly explosive lies therein. As for the music itself - almost every song which the band have penned has felt in some way massive, but Cold Steel is, without a doubt, the finest distillation of this massive, almost over-the-top sound. The record is one made of infinitely memorable, glorious and triumphant moments - melodies which stir the heart with their martial sound, choruses which are both enraged, frenzied and percussive, hammering their words into your heart, and an atmosphere which truly feels empowering. Metal is supposed to be powerful music, and Cold Steel... is one of the most powerful records I've encountered within it.

The album doesn't limit itself by genre when it calls upon sections of music - the album is unconstrained, and the combination of a truly varied collage of styles comes sharply into contact with the pleasantly old-school leaning towards the "riffs, solos, choruses and verses" approach to song-writing. Thus, the record has all bases covered when it comes to the diversity available to them - going well beyond the borders of black-thrash in terms of atmosphere, innovation, and generally bucking the trends of everything laid out before them, whilst still having a sound which is instantly digestible to anyone with a pallet for extreme metal. The album is subtly but effectively soaked in an atmosphere which is both very rich, but also possessed with a real ability to bludgeon, with a greater intensity and rage inherent within the songs than anything the band created before, and what they seem to have been aiming at since - it's not the cacophanous sound of the world ending in a cosmic way, but it is the sound of the world ending in a very human way - slaughter, fire, rebellion and cold steel, and that is perhaps one of my favourite elements of the album - the fact that it is a very human album, and one which you can listen to in that context; it's not an album which transcends humanity, but one which appeals to those it summons; The Fire starters. The Whirlwind Reapers and Comet Riders. I wouldn't be surprised, in any case, if a large proportion of the band's fans consider this to be their definitive work.


And there we have it - Cold Steel... For an Iron Age. For my money, one of the best albums to ever come out of extreme metal as a whole, and certainly a powerful mission statement of what it means to be extreme. The records sheer ability to forge together so many of the elements which make metal great is a pleasure in itself to hear, and this truly is a record which I would recommend to anyone within the metal scene - there are few records which I have ever listened to on such a regular basis.