Black-metal shows are often a bit hit and miss - ranging from truly captivating and steeped in atmosphere, right through to being quite disappointing affairs with sulky, unimpressed crowds, and musicians simply going through the motions on stage, regurgitating their studio material with a somewhat bored attitude. Consequently, I'm never quite sure what to expect when I go to see touring black-metal bands; will their performance - and the crowd's - be fair of foul? Usually, you can take a wild guess by how the band conduct themselves in general - are they divas? rock-stars? Are they professional or unprofessional? I've seen everything from Watain being unsurprisingly fun and rock-star like, with a pristine image and triumphant stage presence, through to much more underground acts like Mare, conducting their shows like a true ritual, captivating the crowd to simply stand and listen to the ceremony which unfolded. There are, in short, a huge number of ways which a black-metal show can be, and such is the genres diversity that you seldom see a show with quite the same atmosphere twice. Thoughts like this crossed my mind as I sat on the train through to Glasgow on my way to see Norwegian black-metal institution Taake - what sort of show was this one going to be? 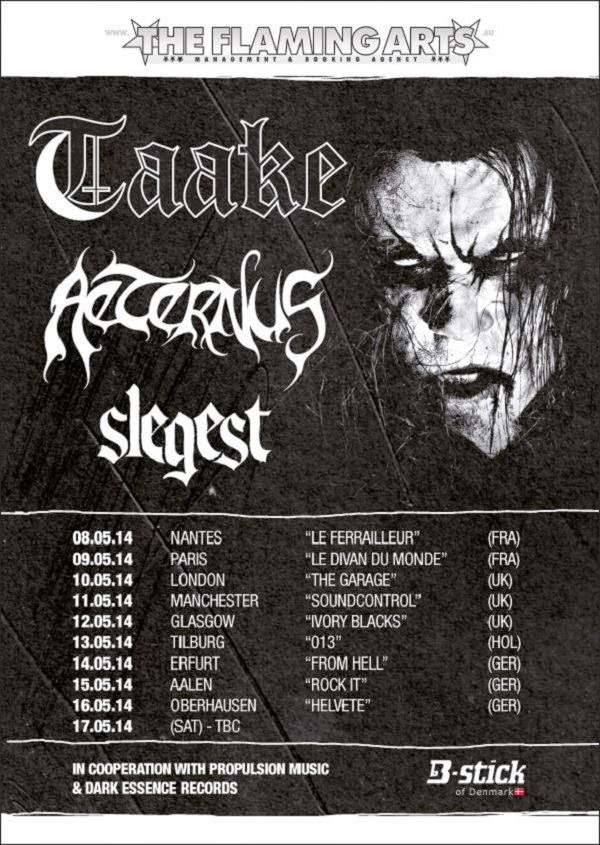 Ivory Blacks is a reasonable venue - comfortable, and suitable for most of the medium-to-underground metal bands in circulation - bands like Eyehategod, Destroyer 666 and Vader have packed the place out quite nicely in the past, and, fairly consistently, acts have had good sound. Indeed, the place is never one I've heard very often mentioned in the context of disappointment; sure, I saw Vomitor there once with about seven people in attendance, but even then, the sound itself was fine. Regardless, I arrive with no idea what the turn out - or atmosphere - is going to be like. I enjoy Taake's studio material thoroughly, and have heard good things about Aeturnus, but beyond that, I have no idea how anything is going to sound, how many people are likely to show up, or anything of that sort. As the opening act, Spain's Noctem sound check, the attendance seems rather low - you could still count, without great effort, the number of people standing around. Fortunately, the numbers gradually grow over the course of the evening, to the point of being reasonably busy by it's conclusion.

Regardless, Noctem come on to a rather shy crowd, who are milling around the columns and generally in a bit of a sleepy mood - which is fairly normal; everyone has only just arrived, and one poor band at every metal show has to take one for the team. Fortunately, the sleepiness is something which the band manage to remedy a little by the end of their set. Musically, Noctem are quite pleasing - blackened death-metal with quite a good atmosphere thrown in, competently executed. The sound doesn't quite seem right, however - I can hardly hear the drummer, particularly the kick and snare drums, and the guitars initially have a very murky tone, with the leads being quite badly muffled. Fortunately, like the crowd, the sound conditions improve a little over the course of Noctem's set, enough to enjoy the band's work, which is energetic and engaging enough to overcome the shortcomings of the sound. The band have a hard time coaxing a great many people to come to the front, but nonetheless, everyone seemed to be reasonably impressed and enthused by what the band delivered, surpassing my expectations, and, by the sound of it, everyone else's too. The support acts may not have been bands I'd listened to prior to seeing them, but starting with Noctem, a trend emerged for them to be nonetheless extremely enjoyable, as opposed to unexciting.

Second up are Slegest. I initially expected a straight-up black-metal act, but was surprised, not unpleasantly, to hear something more akin to black n' roll, with elements from heavy and doom metal. Slegest play what, to my ear, sounds like Aura Noir playing Mercyful Fate covers, and the vast majority of their set was extremely catchy, memorable, and mid-paced. Not especially intense in the manner which the other three bands were, especially in terms of tempo, but offering a different, more rock n' roll section of the evening, and an enjoyable one, at that. The sound problems which befell Noctem has been near-enough completely fixed at this point, and from Slegest onward, the sound from the stage was nearly flawless to my ears, with the swaggering, doom-like blackened music played flawlessly, and with a good stage-presence by the band - they kept the audiences visual attention along with their listening. Support-act though they may have been, they left me with no doubt that they were very much a proper band, and, as with Noctem before them, seemed to pleasantly surprise the crowd - I can certainly rank them among the acts who I intend to listen to again.

Next are Aeternus, who deliver a mixture of death and black metal, all of it extremely explosive - the crowd has now swollen to the critical density at which enthusiasm is flourishing, and a lot of people thoroughly enjoy Aeternus' set. The music is intense, fierce, and easily as energetic as anything I've seen, give or take. The drums pound remorselessly, with unapologetic tempo, stamina, and technical prowess, and are, on every single track, impressive as hell - a true sonic assault on the senses, and the self-esteem of any drummers, myself included, who happened to be listening. The whole band are clearly very passionate about their performance, seemingly putting their heart and soul into it, and sound-wise, it definitely seems to pay off. For the entire set, the band have a scowling, determined stage-presence, and it makes one hell of an impression - you can practically feel the hard work going into the music, and the boost which that gives to the sense of integrity coming from the stage is very tangible.

There is a suspense building interlude - about fifteen minutes, perhaps, followed by an intro track of spoken words - I'm not sure what language, but someone suggested it might be Old Norse. As it fades out, the live musicians of Taake take to the stage. A minute or two later, they are joined by the man himself, Hoest. The crowds response is uproarious. Taake are one of the most consistent bands in the Norwegian scene, but I never truly had an idea of just how big they were, or how enthusiastic the crowd's reception of them was going to be until it happened. The atmosphere in the crowd is, in fact, exceptional - I can feel, and feed-upon the enthusiasm of those around me. Every song Taake deliver is met by a truly electric reaction from the crowd, and the number of people truly in the throes of the music is wonderful to behold. Each song is perfectly executed, too - true to Hoest's vision when he wrote them, and played almost flawlessly - the guitar tone is oozing atmosphere; cold, sharp and absolutely true sounding. The drums are un-triggered, but very audible, and sound all the better for being natural, truly propelling the songs. The fact that Taake makes use of more double-kick than blast-beats is very apparent in a live setting, and gives Taake a sound to call its own, and a furious energy, with few other bands coming close to a similar style.

At the centre of this, Hoest demonstrates that he is one of the best front-men black-metal has to offer, and his passion and enthusiasm for performing truly brings a similar enthusiasm forth from the crowd - the band sound the part, and look the part, with excellent corpse-paint, and a smoke machine keeping their presence hazy and ethereal, driving the focus to the atmosphere and energy of the music. Live, it soon becomes apparent how ferocious, energetic and driving Taake's music can be, whipping the crowd into an at times frenzied state, but also possessed with the true spirit of Norwegian black metal. Of all the Norwegian bands I've seen live, none came close to the sheer legitimacy which Taake seemed to have - the music is the real thing, the genuine article; un-cliched, sincere, and truly exhilarating to listen to. Hoest, and the other musicians, prove beyond a doubt that Taake is among the best black metal bands there is, was, and will be.