As far as the newer generation of traditional metal goes, Skull Fist are one of the bands I've been impressed by a lot in the past, and for that reason,  tend to keep an eye on. Throughout the last year or so, I've been paying an especially high level of attention as to when a new album was on its way. As it turns out, the new album appeared earlier this year; January, I think. By about February I had gotten around to buying it, and now - April - I've finally gotten around to reviewing it. I need to get back on the reviewing-wagon and take a look at more records, as I've been a noxious combination of busy and unmotivated for most of the year so far. To reclaim lost reviewing glory, I may as well start with "Chasing the Dream", the band's second full-length, and a rocket-ride through flamboyant, denim-drenched shenanigans. 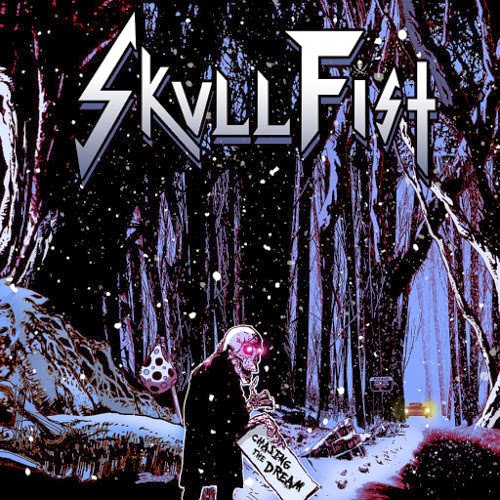 Chasing the Dream is fun. As an elitist fuckhead when it comes to metal, there are times where I happen across a record which is so incredibly fun that I have to remind myself that it's okay - the fact it's fun and that I'm enjoying it doesn't make me a failure as an elitist. In fact, many of the best albums are extremely fun to listen to, and Chasing the Dream is no exception. The record is exceptionally catchy from start to finish, with anthem-like choruses, deeply infectious hooks and possessed with the sort of balls-out attitude which could easily have  landed an album like this pretty damn high in the charts if this had been about 1984, and not its less kind, elder by thirty years brother, 2014. Nonetheless, if where a record charts matters to your general enjoyment of it's musical content, there's every possibility that you're doing it wrong. Chasing the Dream certainly lives up to it's predecessor, Head of the Pack, delivering what, to my ears, is an equally energetic, lead-laden affront to all things sensible, which is around-about the territory in which traditional metal flourishes best; not deadly-serious, but equally veering away from being truly spasticated. Chasing the Dream certainly manages to find that middle-ground, and you get the strong sense that Skull Fist treat making slightly silly - if that's an acceptable term - music as deadly serious business. Indeed, the band certainly exhibit a great deal of song-writing care and inherent talent throughout the record, with an uncompromising lack of filler material - in fact, the record is so lean and juicy that there is scarce a throw-away second of music.

It is not merely in terms of musicianship and composition that the record successfully kicks ass, however - the production really hits the spot too, not least with the fantastic, echo-laden drum sound which I had long thought they just didn't make any more. Indeed, the explosive energy of the drums is extremely well captured throughout the album, creating a record which feels more driven and punchy. As ever, the vocals are probably one of the more divisive issues which Skull Fist have - as before, they sound unlike any other band I can bring to mind instantaneously, with an extremely high, somewhat produced sound - at times sounding almost auto-tuned, which - for sure - would be odd, but nonetheless sounds rich, creamy and smooth, regardless of how they got that way. Indeed, by all accounts the band put on a solid live show, so if the vocals are a little... produced... it seems forgivable. The lead tone, too, also suits terms such as rich and creamy in its description, and Skull Fist are definitely the sort of band who really know how to crown their songs with great lead work, with dexterous and charmingly show-offish style guitar work in almost every track, transmitting winking, eyebrow raising rock-and-roll swagger from every pour on the record's skin, and at the end of the day, there is absolutely no denying that's what the band do best - churn out fist-pumping, head-nodding traditional-come-speed metal with the utmost of exuberance.


Once again, I can safely say that the band have proved, to me at least, that they can concoct a truly wicked piece of good old heavy metal madness, and with just as much skill as their previous efforts - heck, perhaps even a bit more. Either way, I have no complaints about a band who are clearly doing what they love, and doing it damn well. Some may say that it's all been done before, but frankly... some things are always worth doing again.