#336 Ondskapt - Arisen from the Ashes

Of the most extreme sub-genres, black metal was one of the first I encountered in a truly revelation like sense; listening to Gorgoroth and Burzum tracks for the first time in the small hours of some morning, years ago, with headphones on and lights off - one of the first things which struck me about the music was how exciting it felt, and to this day, I have always had a place in my heart for bands which succeed in creating a sound which returns me to that feeling of excitement and electricity. A lesson the black metal fan, or the fan of any sort of music, I expect, swiftly learn is that for every good or great band in the style, there are a dozen mediocre ones, laying below the surface. Of course, this makes discovering the truly excellent bands something which is even more rewarding. One of the bands to reward me in such a way most recently have been Sweden's Ondskapt. 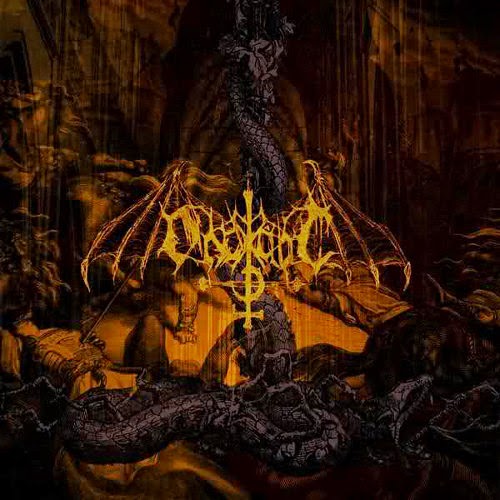 Orthodox black metal is, I feel, one of those terms which nearly caught on for a while, and then everyone forgot. Regardless, it's a term which I seldom hear these days. When I did hear it, however, it tended to be directed towards the sort of black metal which Ondskapt specialise in; ritualistic, dark, and content to deliver an evil sermon without the excessive use of blast-beats, avoiding the woes which can often befall norsecore. All three of the above are characteristics I deeply appreciate in black-metal; often, bands can stifle the darkness within their craft through a sheer lack of flexibility. Records with constant, unrelenting blast-beats can make them difficult to appreciate, especially in an atmospheric dimension. Ondskapt, on the other hand, seem to excel at creating atmosphere, with a suffocating but rich guitar tone and loud, prominent vocals which deliver themselves like a ritual or sermon, echoing like the voice of the possessed, forth from the miasma of guitar-work. The resultant sound reaches a very enjoyable agreement between the rough, old-school feel, but whilst avoiding being indescernible; in fact, one of the great strengths of the record, and one which really releases the atmosphere held within, is the crisp and well-considered production job, which lets every nuance of the sound breathe, without sounding clinical; this includes percussion, which is punchy without being clicky, which, as my aversion to triggered-drum-sound grows, it very fortunate indeed.

Perhaps the key to the Ondskapt sound is the interweaving of the old with the innovative. Arise from the Ashes, and the rest of the band's work, for that matter, doesn't sound like a clone of anything, but also has a pleasingly salient dose of the recognisable things which make the genre itself great. Tangled, diabolical tremolos and leads meet with cavernous doses of atmosphere, in the way one might hope for, when listening to a black-metal album - but simultaneously they are leads and tremolos which you've never heard anything quite the same as before, and an atmosphere which is, to a great extent, it's very own flavour of cavernous. Likewise, when you zone-in enough to attend to the riffs, instead of digesting the tumbling, wide-eyed atmosphere alone, you come to hear that the riffs are exceptionally well-constructed and truly revel in being angular, sinister and steeped in evil, the way black metal guitar was meant to be played. The dexterous, spiders-footsteps guitar work certainly adds it's weight to the atmosphere, with the moments of organised chaos bringing forth images of the mind-capturing and delirious, liminal occult - of a darkness which few bands capture, but Ondskapt well and truly delivered, with each track an exploration of exceptional black metal, and between the vocals and the memorable musical structures churning below them, it is an easy record to lose oneself in, and emerge from the other side feeling decidedly different.


As I said when I began this review - I'll always enjoy a black metal band who can bring back the excitement I felt when I was first discovering the genre. Ondskapt, without a doubt, succeed, and I heartily recommend them to anyone who enjoys the better side of black-metal. When it comes to their style, Ondskapt don't merely conform to expectations, but outright raise the bar, and that, so often, is the symptom of a great band.