I like to keep a well balanced sonic diet when it comes to metal, and while I don't listen to a great deal else, perhaps rendering the concept of "balance" redundant on a wider scale, when it comes to what I do listen to, I like to aim at all of it. I also like keeping this variety abundant when I review things, and considering that for most of this month I've been indulging in looking at the dare I say fancy and gourmet end of the metal-spectrum, it feels like time to come, like a warhead, crashing to earth by reveling in the unsophisticated, slice-of toast that is classic 80's thrash. It's time for a Nuclear Assault. Watch out, it's radioactive. 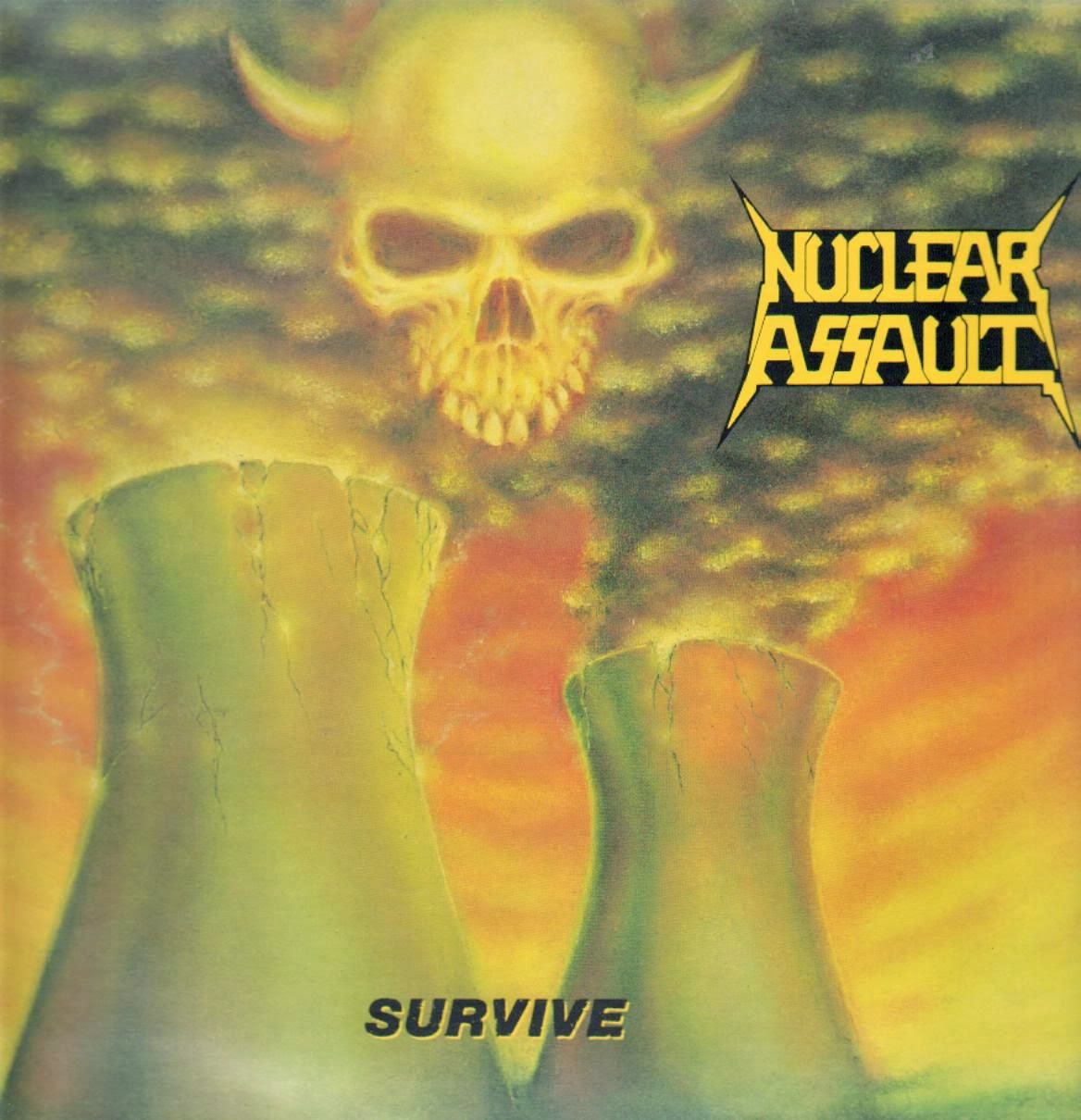 The artwork says it all, perhaps, but the music elaborates neatly. Nuclear Assault, although a band I never experiences while I was discovering thrash, are nonetheless one of exactly the sort I most enjoyed at that time - crisp, energetic, and relatively clean in terms of vocal delivery and song structure. The thoroughbred form of the genre which doesn't incorporate too much of anything else within it - no sir - it just arrives and gets on with it for about half an hour, and, when it's content that you're strewn across a wide area, leaves, cheerfully dusting it's hands. Combining punchy, memorable vocal patterns with infectious riffs in the best possible fashion, Survive is definitely an album which a great many other albums have wanted to be when they grew up. The guitar-work has a sublime blend of crunchy and lucid tone, spread neatly over an engagingly dynamic range of tempos, from the slow, coiled-spring evoking sections right through to the face-melting swiftness of all out thrash, and calling at all available stops in between, to boot. The band seem to especially flourish at the mid-tempo cruising altitude, utterly nailing the simplistic-drum beat propelled goodness which such a tempo-range can bring to the genre, demonstrating that thrash can sometimes kick an inordinate amount of ass without actually jamming the controls on "full steam ahead", just by being tightly coiled and intense. Nonetheless, the band were, clearly, unafraid to up the ante on velocity, and when the album goes, it really really goes, a sort of high-speed cherry placed neatly on top of the musical cake, which, presumably, someone stage-dived into.

Beyond the musicianship itself, Survive is a great lesson in how thrash is supposed to be produced. The guitars manage to simultaneously be dry but succulent, capturing the ferocity and energy of the down-picking riffs. The lead tone stands out well, and really treats the solos and lead-sections well; indeed, Nuclear Assault assert very thoroughly that they're one of those thrash bands who deploy truly blistering, tight and well-thought-out solos throughout the album, and beyond that, also capture them very well for the record. Dan Lilker's bass tone is wonderfully audible, metallic and rumbling, as a bass tone should be, and the drums are punchy and clear, but real. Topping the percussion off nicely is the fact that it has that eighties snare-sound, which practically transcends merely being a sound; you can almost  feel the drum-stick bashing away, and the listener is left with zero doubt in their mind that all of the music on the record happened. Obvious as that might seem, and clumsily as I'm trying to describe it, there are certainly records out there which don't manage that, and that makes the ones which succeed, like this one, all the more rewarding. The production sounds extremely earnest. Not only do you hear the songs, but you hear the musicians, you hear the room in which it was recorded - everything, and that is how a record should sound - you're supposed to hear those things, and they truly add to Survive's shine.

The long and short of it is that Survive is the sort of thrash album which I'm always going to consider to be a true case of thrash doing what it does best; a real, earnest, no nonsense record which gets to the heart of the matter. If you were to dedicate one - and only one - album to teaching someone what the real essence of thrash was, this one would certainly make the short-list with ease. Perhaps it's not the thrash album, but by God it does a magical job of being a thrash album.