Revenge, if I'm quite honest, are a band who I'm taking a thorough listen to today not because I have heard tell of them being good and am eager to listen to their work further, but because for every person to tell me that they're good, my nagging suspicion that they might not be, seems to grow. I'm not truly sure why - some bands just give me that reaction, especially ones as subject to extremely enthusiastic fans as Revenge. My first instinct, when looking at the artwork - skimming through the back-catalog a little, and so forth, was that we might be looking at a case of style-over-substance here. It therefore feels like my duty, in case they're actually really good, to listen to their material for a while, and dissolve my prejudices. If the prejudices reform, crystallized, when the mixture evaporates, so be it. 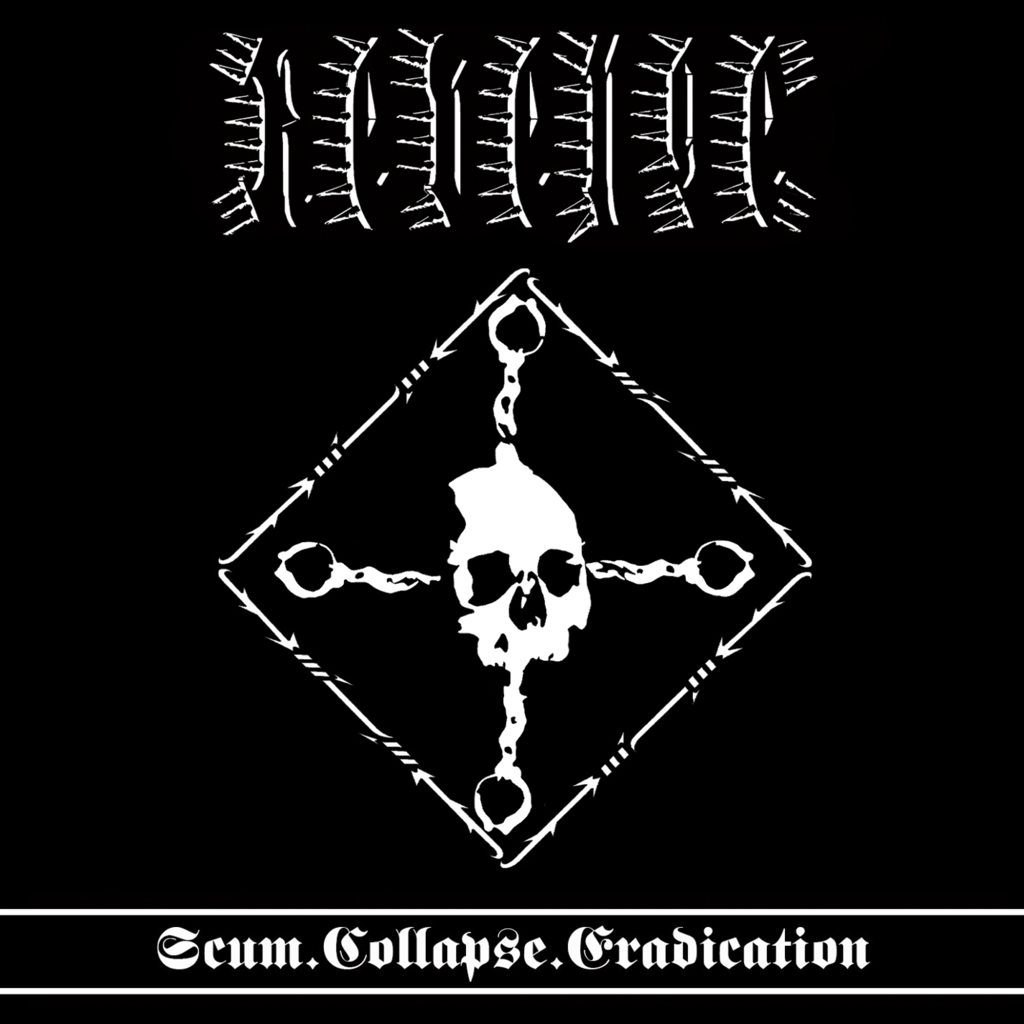 I have to be quite candid about the impressions I had of Revenge before I listened to their work with a bit more care. Often, I feel like I go too easy on bands, and that's because as a reviewer, I need to be self-aware that almost everything I say in my reviews is simply my opinion, and, unlike many, I don't have the delusion that my opinion amounts to fact. Nonetheless, all too often I feel like I dilute my opinion when it's one which I feel might be controversial. This time, however, before I look more properly at Revenge's music, I'll properly air my prejudices. I'm an elitist about metal... but I'm also an elitist about elitism. The impression I got was always that Revenge were a go-to band for elitists who wanted to like an elite band, but didn't want to do any of the real exploration or thinking involved in doing elitism properly. In short, for the metal-head motivated to attain trve-kvlt points easily, Revenge served the purpose of being My First War-Metal™, drawing in the style-over-substance elitist with their fun, stylized artwork. After listening to Scum.Collapse.Eradication, however, I've come to a realization - this is, once again, a case of a band who have a multitude of quite shit fans - through no fault of their own - and I've foolishly been taking it out on the band instead. It's not Revenge's fault that the more irritating among our elitist brethren flock to them - in fact, having listened more closely to the music, I can safely say that as music of its type goes, they have quite an enjoyable sound - into which, so this piece takes the form of a review as opposed to a rant about those who fellate the hippest, trendiest things the Grand Council of Elitist Prophets decree good, instead of thinking for themselves, I shall endeavor to do in the next paragraph.

Frenzied, primal, primitive and pounding - in four words, the work of Revenge in Scum.Collapse.Eradication is summarized quite nicely. Thirty-five minutes of the rumbling black/death metal of the sort pioneered by Blasphemy, but arguably with a bit more kick and thwack to it. Frenzied vocals release an indecipherable tirade over the prominent drums which mix competence and rage neatly into an eclectic package of very sporadic, often slightly unusual (but very effective) sounding blasting, with slower sections scattered between them, which is really where Revenge's thing lies open for appreciation - that is, the crushing guitar rhythms, like cave-men beating rocks together, show through, with their churning rage, like a brooding storm of bestial anger. The spastic solos aren't really my cup of tea, but I'd be wrong to say they're inappropriate for what Revenge set out to do, which is, in fact, very well executed indeed. The sheer crushing feel, combined with the fist-in-the-face riff-structures and chaotic percussion is the matter truly at the heart of the style, and there are few bands within it which can match what Revenge do with it - pound for pound, the band have one of the best guitar-tones within their niche, along with the most disgustingly evil production values possible. All in all, the record is one which has grown on me with subsequent listens, and I definitely enjoy it far more than I expected to initially - in fact, it's among the best war metal, death/black metal, bestial black metal... call it what you will... records which I've heard in a while. Revenge have impressed me considerably. Their fans, or a certain number thereof, remain subject to my skepticism until further notice.

So there we have it - surprisingly reasonable - good - great, in fact. I think it stands as a testament to being self-aware and making yourself explore things which you have prejudices against that really marks the true enthusiast for metal - or for anything, of that matter. While the band may - perhaps arbitrarily - represent some of the things which are wrong with metal-elitism, the band themselves, both in terms of music and integrity, have truly earned my respect.