It's easy to listen to a band and say "there's nothing else like them". Sometime you get a little carried away by a band with a pleasing sound, while at other times, you simply haven't heard any bands like them yet. The thing about Urfaust, however, is that when that phrase is applied to them, there's a very hefty probability that it's actually true. There really is nothing else quite like them, and for good reason; Urfaust do things with black-metal which I can safely say, when they arrived on the scene, nobody say coming. When I first listened to the band on a whim, myself, I certainly got a surprise - their music was nothing like I expected, and extremely pleasantly so. In fact, it was the kind of band whom, upon being heard, utterly erase your expectations - I have no idea what I imagined the band to sound like. A few months down the road from discovering their work, I think it's review time. 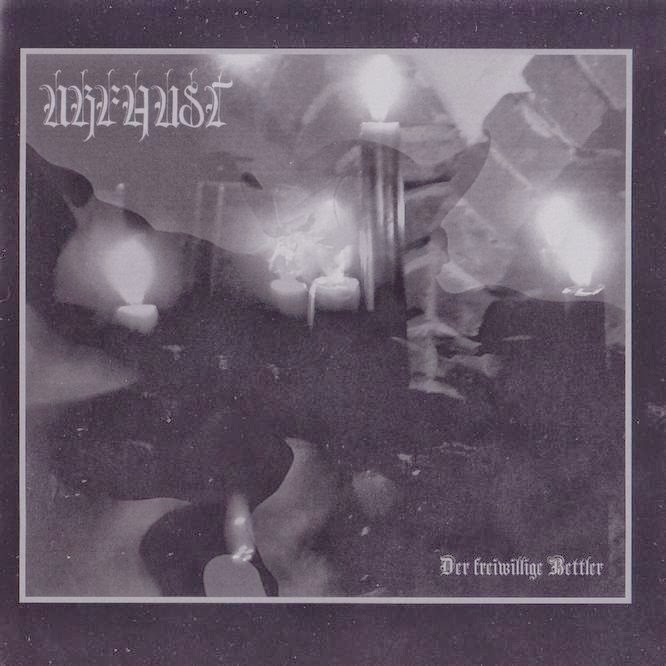 Urfaust don't aim to sound frostbitten, or even grim for that matter. In fact, their music is extremely soothing and warm by black metal - or by any - standards. Der freiwillige Bettler is the band's third full length, and expands upon their previous work nicely, encapsulating what I enjoyed about their earlier work, but layering it on more thickly and generously. While, for instance, the band's debut was an extremely minimalist affair in the style of the crackling, ragged side of Burzum exposed on records like Filosofem, this record instead ups the ante with regards to deep, luxuriant atmosphere, while maintaining a roughness which no longer quite characterizes the work, but remains present. The atmosphere - truly the crux of the sonic matter - is one which really must be heard to be believed. Ritualistic vocals and synthesizers interweave like candle-smoke and incense haze with the heavy but cavernous sound of the guitars, gifted with a doom-like level of sustain, and propelled by equally cavernous drums. This ritualistic edge truly absorbs the listener, and I can happily testify that it transported me to a very different place from the one I was in before pressing play. There is a deep, tangible liminality to the record which renders it possessed with a genuinely spiritual feel, and transcendence which very few albums come close to matching. It feels like being lost in the bowels of some temple, as chants and incantations reverberate through it's labyrinthine halls.

Simultaneously, however, the album doesn't have the "typical" occult sound - or subscribe to any sort of template of how a black-metal record "should" sound, for that matter; many of the structures throughout the album defy the way a black-metal album is expected to be. A high level of attention to groove, swing and the occasional almost folk-like time-signature gives the album a side which not only defies norms, but as with bands like Lugubrum, endows the record with a distinctly European flavour, as opposed to the Scandinavian tint which so many strive for. You can hear the album's warmer latitude, compared to that of its Scandinavian peers. One thing which perhaps most dramatically sets the record apart from others is it's unconventional vocal style, combining miserable screeching with a carefree, almost drunken sounding clean-vocal approach which manages to be melodic, fierce and slightly disconcerting simultaneously, and while one might prima facie get the impression that the vocals aren't quite in tune, they in face blend extremely well with the music in the background - settling extremely well into creating the album's direction and feel, both in elevating the atmosphere into greater heights of narcotic haze with the melodic elements, or adding a darker, sharper and more pained feel with the harsh vocals. Regardless, the mix of elements on Der freiwillage Bettler seems to be one which truly hits the nail on the head, and creates a record which feels immeasurably rewarding to listen to.


There are few records which travel from me discovering them to them being among my favorites quite as rapidly as this one has. I was, from the very onset of listening to it, drastically impressed by what it had to offer, and as far as I'm concerned, deserves the prestige of being one of the most beautiful and most sonically interesting black metal records in recent years.