It's always interesting when you discover - properly - a band whose existence you've been aware of for a while. As you slowly begin to absorb their style; what they really sound like, as opposed to what you assumed they sounded like, all those years ago when you saw an article about them somewhere in Terrorizer magazine, sometime before you stopped reading it when they had Joey Jordinson on the cover. Maybe I'm getting slightly too specific to relate to - nonetheless, the above is precisely what happened to me with the band Bastard Priest, presumable around the release of the album which I'm looking at today; Ghouls of the Endless Night. At the time, I can only remember hoping dearly that the band sounded like their name, but for whatever reason, I neglected to actually listen to them. A few years later, and I finally bought a copy of the record on a whim some weeks ago, and ensued to tuck-in to greasy d-beat laden goodness with glee. They do sound exactly like their name. 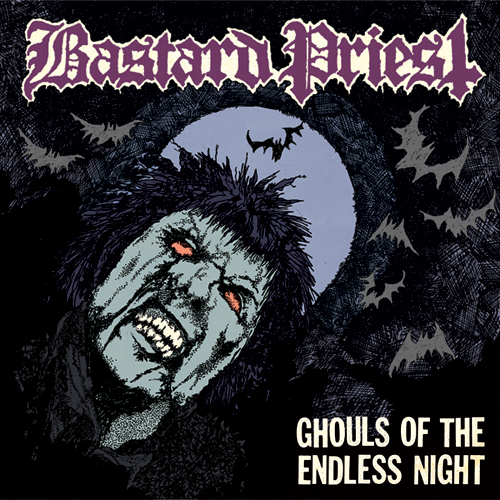 I've yet to listen to the bands debut album, although you can be assured that it is quite literally in the post. This record, on the other hand, is the band's second. While there seems to be a consensus that it's a little less good, it could certainly have fooled me, and I can safely attest to having enjoyed it very much. Ghouls of the Endless night represents among the filthiest, most vile, repulsive and snotty old-school death metal to be crafted by the post-millennium scene; rough, gnarly production values collide with a deafening, jet-engine-style Swedish-death metal tone, in the style of Entombed and several billion bands who sound a bit like Entombed. The tone on this record isn't generic, however - it's steeped in character, and probably some sort of alcoholic liquid, to boot. It sounds like a chainsaw trying to cut its way through some a rusty corrugated-iron shed, from the inside out. The whole record has that sort of feel, not just from the tone, but the rough, manic, punk-laden payload which constantly looks in danger mauling some innocent bystanders. Often, these days, old-school death metal can fail to truly capture the madness which old-school metal is at times renowned for, instead aiming for cavernous and eldrich sound, and treating the music as serious, atmospheric business. When it comes to lunacy, however, Bastard Priest do a fine job indeed - the album exudes wide-eyed, reasonably-drunken antics to a tee; the drumming a perfect synthesis of frantic clattering and tight, pounding time-keeping - just the mixture of the two to guarantee an "as-live" sound on the record, and produced in such a way as to give the whole album a deafening kick, with every snare-hit and bass-drum beat battering the listener unsympathetically.

Bastard Priest certainly hit the nail on the head when it comes to ticking the boxes of what should be included on an overtly old-school record; vintage production, and vintage just about everything else - the vocal-distortion, especially, really adds a cherry on top of the record, and while perhaps not the most prominent feature on the album, contributes more than you'd expect to the enjoyment over-all. These small details really illustrate what it is that makes this album, and any album, a good one; the band definitely seem to be one who have kept close tabs on the little things which can really contribute to a great sound. What's more, Bastard Priest have handled all of them; production, artwork, and most importantly, songwriting itself, exceedingly well. The record doesn't contain more than it needs to; it's not especially long, and neither should it be. There isn't a single hint of gratuitous songwriting at all, with, as far as I'm concerned, not an ounce of filler throughout the whole thing; it's lean and nasty, and it goes where it's going without fucking about along the way. In that respect, it's a lot easier to encapsulate the band's sound in words than one might expect; it is, quite simply, unapologetically filthy old-school death metal. It doesn't try to be anything more than that, but, far more importantly, by god it does a good job of being that. The best records aren't always the best because they're riddled with innovation, progression, or technicality. Many - I submit most - of the best records are the best because they're exceptional at their respective genre. Like this one.


And there we have it. It might have taken a couple of years of latency between hearing the name and actually investigating the band, but it is, perhaps all the more rewarding for it; I doubt I would have understood quite so openly what was awesome about Bastard Priest if I had dived straight in - indeed, at the time, I barely knew about death-metal at all, let alone the sort of this style. Perhaps this isn't an album which it took me too long to listen to at all, but one which waited until its time was right. Now, it has to be said, I have always got time for old-school death metal.