Anyone who spends a reasonable amount of time getting to know the local metal community; bands, and civilians alike, is likely to have encountered the small, reclusive proportion of individuals who complain that bands "never come to where I live". The diagnosis, in these cases, tends to be that such individuals are a statistical inevitability; when one is only into about four bands, it's not at all difficult to see the likelihood that none of the four are touring near here at the moment. The bottom line is that it is seldom the scene which is truly shit. It's often the people. The bands who do reach Scotland are a testament to how good the live music which does reach us can be. I've spent the last few years amazed by the number of bands which I have been able to see. Vader, Rotting Christ, Watain, Saint Vitus, Wodensthrone, Bongripper, Anaal Nathrakh, Destroyer 666, and countless others. All fantastic gigs - gigs by bands of the highest calibre. Frankly, it fucking astonishes me how many of the bands I've aspired to see live someday, I have now seen. The only thing which astonishes me more are that some metal... fans... retain the audacity to pretend that we live in a desert with only a trickle of worthwhile bands tumbleweeding their way through our shores.

You might be wondering if this rant is in any way relevant to doing a live-review. I'm pondering precisely the same thing, and the ultimate answer is this; tenuously. Talking of bands that I've aspired to see for a long time however, Overkill have been one I've always hoped to cross off my list someday, and now, finally, after their - to my knowledge, first ever Scottish show last week, I can. Overkill have, for as long as I've been aware of them, had an impeccable reputation as delivering the goods in a live environment. I had high expectations going into the venue that day. Later on, after finding my missing limbs from the four corners of that very venue, and reattaching them, I concluded that they were met, and exceeded... 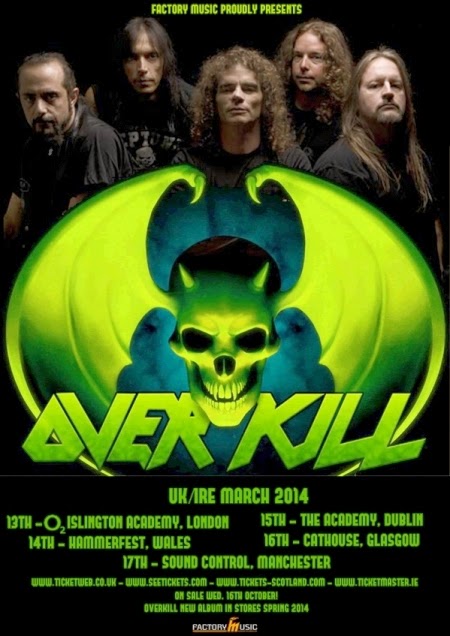 It's been a while since I attended a show which had a queue. It's always quite reassuring to see that more metal fans exist than the usual, recognisable ones who are at many shows. It's also a bit of a shame that many of them are so rarely seen at live shows, but nevertheless, it's always good to see metal-heads who you don't know by sight... or back-patch. Either way, it's good to be in a larger venue for a change, even if it is one which has a slight reputation for poor sound. It seemed alright to me, but I, it has to be said, don't know anything. It's also very pleasing indeed to note that the show is almost sold out, offering the promise that the bands might be leaving that night enthused, and with more than just a packet of mints to their name, and from an atmosphere point of view, resulting in one of those genuinely cant-swing-a-cat, crowded, suffocating gigs which, in the right circumstances, can be fun, nostalgic, and above all, insane. This being a thrash gig, the latter is precisely what I expected. And got.

The openers are Shrapnel, from Norwich, who seem to be one of those thrash-revival bands who were a bit late to the party, and, like Lost Society before them, have only been on the scene for a year or two in a tangible sense. Then again, that begs the question - are new thrash bands late thrash-revival acts, or bands which just happen to play thrash? Regardless of the answer, Shrapnel also happen to be quite good - they exceeded my expectations when I listened to their studio material in the run up to the show, and they met my expectations as a live band. Shrapnel don't have a particularly long set, and throw what is perhaps a slightly overwhelmed "thankyou so fucking much" between almost every song, but also manage to deliver a scathing assault of Sodom-meets-Slayer caustic, aggressive thrash, with the occasional blistering solo. The delivery is tight and precise, and while I can't hear the bass drums as well as I would have liked, the rest of the sound seems to be reasonable, and it's pleasing to witness an opening band who many may perhaps have been sceptical about being done justice, and doing justice to their material with a strong sense of competence.

Next are Xentrix. Their set is cut rather short short by a fairly hefty piece of drum equipment breaking - a bass-drum skin, or a pedal, I would suspect - but unperturbed and unafraid, the band fill the ten-minute gap with optimistic charm, keeping the crowd awake with with stage-banter and randomly playing bits of intros from thrash classics, interspersed with the occasional assertion of "no, we're not playing the Ghostbusters cover tonight". The songs which do get played without technical fault, however, are glorious. Precise, pristine thrash making use of every tempo to really encapsulate what the genre does best. Since reforming, the band seem to have been on extremely good form, and show no signs of losing momentum. They even debut a new track which sounds every bit as good as their older material - if not slightly faster than their usual fare. To come back from a long hiatus with such solid new material is an extremely rare achievement for a band who formed the first time around so long ago, and serves as solid testimony to the Xentrix mastery of the craft of thrash. The playing is top-notch, the music is top notch, and for the most part, the crowd seem to be as excited as they should be, which is rather.

Overkill then proceed to happen. They continue happening for at least an hour and a quarter - more generous than almost any other band of their calibre. In a time where some of the best known metal acts in the world give you a fifty-minute set, Overkill demonstrate that they've always been the sort of band who do a bit more. The band spend their time on stage being genuinely explosive, and the crowd reaction is, likewise, explosive. A few minutes into the first song, which happens to be "Come and Get It", a pit is progressing merrily, and by the end, the crowd-surfing has begun, albeit falling victim to that schoolboy error of the surfer reaching the stage just as the song finishes. Not to worry, however, because the next track is Wrecking Crew, which begins the process which most medium-sized metal shows undergo when enough energy builds up; that is, the same three people crowd-surf to the front again, and again, and again. This three man conveyor belt continutes, if memory serves, more or less right through to the end of the show, and serves to illustrate what Overkill do better than any band I've ever seen; bring the spirit of thrash to life. Not just the music, and not just the image, but the true, heartfelt adolescent gratuitous energy, the urge to run around in a cramped, sweaty room. For the duration of the set, regardless of when it was on the street outside, it was the late 1980's inside.

Musically, Overkill were on superb form, living up to the insane energy which had been foretold, and performing the songs with the sort of relaxed, easy skill and confidence which has been gathered over the decades. Bobby Blitz' vocals are still great, and he remains one of the most present and energetic frontmen in the business - impressive for anyone, let alone a gentleman in his mid-fifties. His stage banter could be the stuff of legend in its own right, and while breaking the "fourth wall" of the predictable catchphrases of stage banter by proclaiming that "that shit works everywhere" after enticing the crowd to make more noise by proclaiming that the English were louder, he nonetheless does seem not only to deeply enjoy what he's doing, but also to be genuinely pleased to see an enthusiastic crowd. In general, if age is something on any of Overkill's minds, they do a very good job of ignoring it's effects - the music is every bit as good as it would have been at any point in the bands career, and it really throws into light how special overkill are.

Many of the first thrash bands have stood the test of time, but few indeed have stood it as well as Overkill seem to have.  As far as I'm concerned, they have among the best classic material, the best comeback material, and even the best not-quite-so-good-middle-era material, compared to their peers. This night, they also proved that they still put on, for my money, the best live shows.