For review #333 - half way to the some-day attainable #666, it feels quite appropriate to review a rather devilish album. Fortunately, there is just such a record which I've had a mind to review for a while - the début full length record by Michigan rock n' roll undesirables Shitfucker, who, in addition to having one of the best band-names I've heard in quite a while, have also, late last year, put their name to an equally good and exceptionally filthy record by the name of Suck Cocks In Hell. As with much of the best in heavy metal, Shitfucker don't immediately come across as the sort of band you want to invite to your parents' for dinner. Which, considering the band name, is hardly surprising. 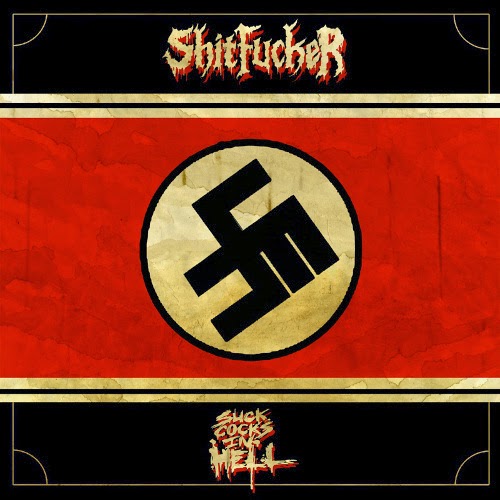 To a tee, Suck Cocks in Hell is raucous. A rocket-ride through precarious, frantic filth of very questionable sobriety; it sounds the way a Hammer Horror movie feels. What's more, it's exceptionally catchy. There isn't a single song on the album which isn't memorable, and all the while, the record both affirms and rejects the accepted formulas of what an "old-school" metal record sounds like; heck, it even rejects the formula for being any particular genre. Which begs the question - what is this album? It's clearly heavily punk influenced, but there's a lot more going on. It has the energy of thrash, but also plenty of black-metal elements, and traces here and there of the nastiest strains of death metal, of bands like Autopsy, for instance. To top-off this noxious and thoroughly enjoyable mixture, there's a good slice of old fashioned, slightly bluesy, balls-out rock n' roll thrown in for good measure. The end result is an album which truly owns a sound - no band I've heard has quite the same, potentially explosive and probably illicit recipe. If the record were a chemical substance, policemen in riot gear would more than likely leave you in need of a new front-door. Either way, this volatile concoction of styles and influences immediately steeps the listener in the glory of everything which is old-school, but without the dubious ambition of being retro. The whole record is track after track of rough, foot-stomping misbehaviour - a parade of caustic, twisted and grimy tracks which are full of spit, venom and at times dark humour in equal measure. The record captures the ugly side of heavy music like few others ever have.

I suggest that, only now, some decades after "the old-school" has settled into the collection of bands we attach the tag to today, can a record with a sound like this exist. A band with this sound couldn't exist in the same way, back then, despite the influences making up Shitfucker's sound all dating from such a time. There are many bands to which this applies - another which leaps to mind being Midnight - but as it happens, the thought leapt into my head just now. Nonetheless, without sinking too deeply into odd musical theories, Suck Cocks in Hell is a contemporary interpretation of the old-school, and that gives it a freshness which transcends that of bands who aim to be gratuitously retro. Either way, I've well trodden this path already through this review; onwards to more sensible observations... Production is a key ingredient in the sound of any record, and this record, for what it aims to be, has it nailed. The production is legitimately gnarly. The sort of production which would still be dirty if you put it in the washing-machine for hours on end. The record captures live-energy and tonal warmth, while simultaneously granting the music a haphazard and nonchalant edge through sheer roughness and bludgeoning noise which supremely suits the message the band are trying to send. Good and bad production is, and has always been, about sounding right, and Shitfucker sure as hell understood this while they recorded this record, in a shed, studio, or, most likely, ominous dungeon. Shitfucker are the kind of band who leave the feedback in.

Either way, I've never heard a record quite like Suck Cocks in Hell, despite it also having a very pleasing familiarity - perhaps an ideal recipe for the sort of album which combines being wholesome with being catchy, and the album succeeds in being both. There is little more to be said, other than that Shitfucker certainly do the term old-school justice here.