I don't review EPs especially often, and, quite frankly, I suppose I could do with some practice. Another thing I've really been neglecting to do is review things which people have been asking me to for, well, a while. Output may not be quite as lightning quick as it has been in the past, but standards must remain. Therefore, in the name of not being useless, and in hitting two birds with one stone, today I'm endeavoring to have a listen to "The Ugly", the relatively new to download and not quite out yet physically EP by San Francisco outfit Hazzard's Cure. 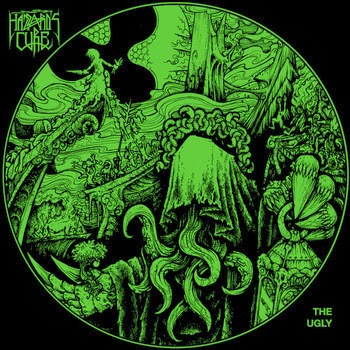 When I reviewed the band's full length, as far as I remember, I was copiously impressed by their ability to create music which was a real mixture of everything, and, while revisiting the self-titled in preparation to listen to the new EP, I certainly felt excited once again by it's ability to be so many things at once; blackened, stoner-infused and with a slew of other things on top like a heavy-metal chef's-special, the self-titled will certainly be an interesting challenge to build upon, which, though it might not be a best-case scenario, is almost inescapably how subsequent works by any artist are judged. The Ugly is, first things first, a little bit more black metal in it's direction, but sort of politely so - the sound remains quite warm, comfortable and sweet, despite the marked increase in tremolos and other such black-metal accouterments. If black metal bands were pools of water, the one used on The Ugly would certainly be one I would vaguely trust to be drinkable, and I mean this utterly as a compliment, not a criticism. The production is wide-open, creating a feeling of both vastness and intimacy - the instruments have a clarity which draws them all apart in the mix, and leaves them each, individually bare for appreciation, but simultaneously gives the band a pleasantly frantic, clattering sound (particularly the earnest, organic drum-sound) which has a distinctly crust-punk, Amebix-meets-black-metal feel.

Indeed, it is worth remembering from the word go that Hazzard's Cure still aren't in the business of icy, pine-tree sprouting grimness, but instead remain dedicated to their quest to use black-metal as a vehicle for an altogether different sort of sound, which has already been well proven to incorporate a lot of things. This is perhaps illustrated that, for being an EP of well under twenty-minutes, The Ugly certainly manages to throw one heck of a lot at the listener; fast, rumbling black-metal sections collide headlong with swaggering sludgy sections coated in filth and Eyehategod style bile and spit, or slightly less jagged, brain-warming stoner-like sections, which themselves mix in the massive sonic melting pot with almost traditional sounding sections, which emphasise themselves well with the bass-heavy production, which really lets the bass lines warble freely and prominently - at one point on the EP, I'm fairly certain there's even an epic solo section of some persuasion. This is all united nicely under vocals which sit on the fence between roaring, singing and shrieking - dipping their toes in whichever is appropriate for that moment in the song, and at no point failing to evoke the ravings of some ragged, slightly crazed prophet of the apocalypse, in the best possible way. As I think I have remarked before, equally impressive is how well all of the styles which Hazzard's Cure taps into blend together into one homogeneous thing; the record feels natural and smooth, as opposed to overtly spastic and glued-together, which is certainly something many would naturally suspect such a mish-mash of genres would result in - not this band, however - pulling off ridiculously eclectic without dipping into the ridiculous itself.

Once again, I can safely consider myself rather impressed by Hazzard's Cure's work, and shall, once again, renew my intentions to keep an eye on what they produce in future - if it remains as consistently good as this, then I can safely say there's a good chance I'll love it, and, already, I'm beginning to have my suspicious that the band are rather underrated already. For what it's worth, hopefully this review reaches someone who will enjoy their music too.