"I've been a fan for a long time - I remember when there were only 1000 people at their shows". This  YouTube comment represents the gem of silliness, a diamond in the cognitive rough, and the great catalyst which made me write this review. A few days ago, I decided to listen to Danish something of others Volbeat, to see what all the fuss was about, and in so doing, I inevitably took a hefty dose of - as all YouTube videos exude -  comment-section wanker-radiation. There's something inside me; most likely the massive elitist fuckhead part, which really took aversion to the comment - it amuses me that the commenter believed that "only a thousand" is some sort of benchmark for hipster-grade obscure knowledge of the bands roots. Personally, the vast majority of shows I've ever been to have had under a hundred people present, and I still wasn't someone who could claim to have discovered the band "before they were cool". The truth is, while Volbeat seem to be the flavour of the month, most metal bands just aren't cool, and never will be. However, I digress. My point is that the comment sent me into a barbarian, hammer wielding poser-crushing mindset, and I had every plan to spin a Volbeat album a couple of times, and then ride at it with burning torches and sow its fields with salt. Unfortunately, it quickly emerged that Volbeat... well... weren't exactly shit. 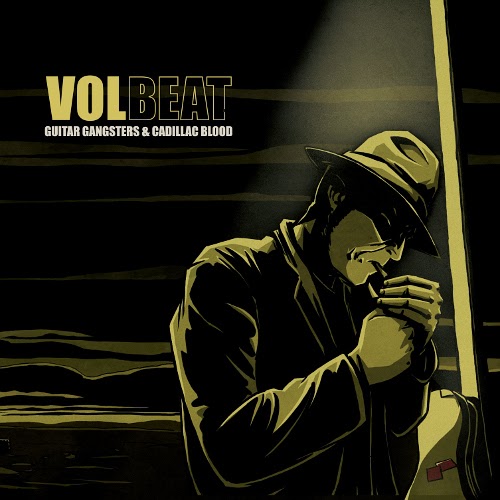 That isn't to say that I now consider Volbeat to be top-tier excellence, or anything remotely near - but it certainly seems that I'm continuing my streak of visiting albums I expect to dislike but which turn out to be, at least, reasonable. Volbeat seem to be the sort of thing which would have been spawned had the members of Metallica been listening to a lot of power metal whilst creating Load and Reload - it's an interesting coming together of soaring vocal lines with butch, groovy and bluesy riffs. The resultant creature is fiercely catchy, to the point of rendering you powerless to resist. A sort of metal version of Nickelback; Despite their protests, most people can, will, and will guiltily enjoy singing along to after a few. So too, with Volbeat - they're the sort of metal which is perfect for people who read Kerrang. Not to belittle their trade - Volbeat that is (I belittle Kerrang on a fairly regular basis), - indeed, catchy rock n' roll is a very honourable calling indeed - but it's certainly a very sweet, nicely made, and with enough nods to hard-rock to really fill arenas, stadiums and huge venues... heck, maybe a thousand people is very few in this context. The Guitar Gansters record - the only one of theirs I've listened to - is certainly quite produced, and mind-blowingly accessible, but, as someone with a soft-spot for glam, there is certainly something to be said about setting aside prejudices against commercial sound (which is certainly present), and instead allowing yourself, for a little while at least, to sell out a little bit and have fun.

Fun is, I'd venture, the best word to describe the record - it's a ruckus - a smiling rumpus of rock n' roll. You don't need to work very hard to enjoy it, but never mind. The stand-out feature of the record is most likely the vocals, which are, much like the rest of the record, very much of the guilty-pleasure variety. They sound like they've had something post-production-wise done to them; not auto-tune, but certainly the feeling of having been through the digestive system of a computer. This sound, however, renders the vocals warm, and sort of sonically indulgent. This becomes especially prominent considering the sheer number of choruses which the band manage to weave in such a way as to perfectly become inescapable. Just about every song has, at the very least, a part which will become embedded in your head for hours, whether you want it to or not. The singing voice of Micheal Poulsen is, without a doubt, fantastically rich, and impressively emotive, in a sort of mainstream but rather enjoyable way, albeit with a somewhat more impressive range than your average vocalist.  Indeed, as a sort of summary of Volbeat, while I'm sure a lot of their fans are "the kids who listen to any old shit", this is the best thing they've latched onto in a bloody long time, and good on Volbeat for managing it. It's definitely not the sort of thing I would listen to every day, but the band do seem, pleasingly, to be quite a respectable institution.


At the end of the day, I can't claim to be astounded on any sort of significant level by the bands work; it's certainly well made and catchy, but it's not what I tend to look like, and thus, of course, from my subjective point of view, it doesn't quite hit the spot. Somehow, nonetheless,  Volbeats music - or this record at least -  is very solid, despite not being quite the flavour I tend to go for, and I can certainly appreciate why it is so liked, even if the band show the signs of imminently joining the "annoying fanbase" hall of fame.