Black thrash is, without a doubt, one of my favourite sub-genres of metal, and one which I've dedicated a lot of time to exploring, and, more importantly, enjoying. Slotting somewhere into the great blackened jigsaw of the genre are Sweden's Nifelheim, a band who, in the last few months, I've really begun to appreciate. As with most such bands, the time has inevitably come for me to dedicate an afternoon to trying to review it fluently, whilst no doubt merely treading verbal water before drowning. 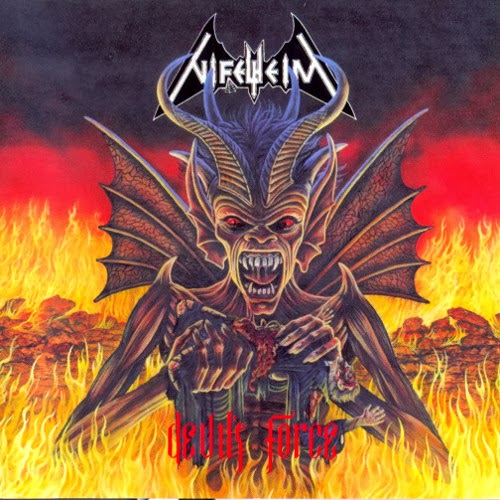 Perhaps it becomes true of any genre which you come to know very well, but to me, when it comes to black-thrash, one of it's most stimulating facets is its sheer diversity; from drooling, spitting punk-fused grime, right through to tight, razor-sharp, lead heavy black-metal-centred evil. The genre spans an extremely wide range of influences, and this is one of the things I very much take away from listening to Devil's Force, which happens to be Nifelheim's second, and so far only album I've listened to thoroughly enough to competently (or nearly competently) review. The album speaks of this variety, making bows to both of the styles I gave some exposition above. Nifelheim are equally adept in bringing forth attitude-laden, sneering sections, whilst constantly remaining threatening and dangerous with their black-metal sections which contain a very real portion of the father-genre's atmosphere and devilish ferocity. Nothing about the entire album is laid-back even in the slightest - it is, in fact, entirely full-steam ahead, like a demon unchained. From the very first burst of energy, the record makes it very plain that there will be no mercy, and no survivors. The curling, intricate riffs caked in rough, snarling production make the album manic, unforgiving, and chaotic in the way that, like a fox among hens, the music rampages like a bloodthirsty demon among nuns.

There's certainly a gulf between black-thrash which is simply "dirty", and black-thrash which is legitimately steeped in black-metal. Nifelheim have a certain shadow of legitimate evil to them by coming from the second of these two camps, lording over music which can easily be referred to as truly nekro black thrash, like a dragon over a hoard treasure. The album - and the band as a whole, is easily equipped with the dark music to back it up; the guitars sound truly malignant and evil, and the reverb and echo laden vocals practically strip flesh from bone in a rabid frenzy, while the music weaves a weapon which is cruel and barbed, more than simply forceful and aggressive - and it is here in which the genius of the record lies. So often, a black-thrash record can be aggressive, but less often does it manage to capture evil music perfectly. On this record, however, the dark, nocturnal feel is very much intact, which certainly renders the album a little bit more hair-raising and exciting in the true sense of the word, when compared to a number of other black-thrash bands out there. Also to be praised is the frantic energy of the record, which is certainly top of its class - truly akin to a whirlwind of destruction, without devolving into an incomprehensible soup; a solid compromise between force, atmosphere, and technicality.

Maybe it's because I'm drawn to dark things, but there will always be a special place in my heart for music which could truly be a sound-track to Lucifer rising from the pit, and you can be absolutely certain that Nifelheim are the sort of band who could headline the main-stage in Hell. This record is the unholiest of the unholy, and all the better for it!