Kreator were first mentioned to me many years ago by a friend who introduced them as "the band which makes Slayer obsolete". Opinions probably rather differ on how acceptable this analysis is, but one thing is certain - it's more than enough incentive to listen to some Kreator. Perhaps foolishly of me, I ended up distracted by one thing or another, and actually only finally got around to listening to the entirety of the bands seminal work "Pleasure to Kill" a few days ago. Now, several listens later, I think I'm ready to dive into one of my "Jesus Christ, how many hugely influential bands have I missed out on" style reviews. 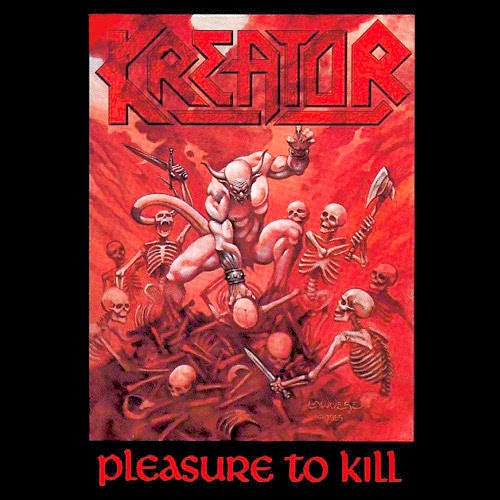 Pleasure to Kill is certainly a lesson in the more unforgiving aspects of Teutonic thrash. As thrash records go, heck, as records in general go, this one is quite a battering onslaught. Prima facie, a large proportion of the album appears to consist of bludgeoning thrash beats at roughly the highest tempo they can reach without being bona-fide blasting - what I'd refer to as a thrash-beat, although I'm not sure if they have a proper name. Consequently, the record is, from the moment the intro is trampled by the main body of the music, one which is extreme to this day, and exceptionally extreme for 1986 - I can safely say that I had no idea that the album would be as intense as this. Granted there are few rests between tearing, brain-demolishing sections, but when there are, they tend to be just as crushing and add a few much needed hooks, for after all, if the whole album was fast-drums and blitzkrieg-bumblebee style riffs, it might lose it's second crowning feature - those hooks. Pleasure to Kill, it must be stressed, has more to it than a primal, primitive assault on the senses - it's fast, sure - the way thrash was meant to be served, but likewise, the guitars and scathing vocals deliver many a noteworthy moment which can really crown a song. The vocals, particularly, tend to have rapid fire but discernible and hypnotically rhythmic style with emphasis placed well on certain words or phrases to really hammer the vocals into the listeners conciousness.

The production of the record complements the extremity well, with the dry, bass-heavy sound coming through which other bands - notably Sadus and Slayer - used as well. Normally, dry production bores me to tears for it's relative lack of reverb and juiciness, but in this instance, at the most extreme horizon of thrash, it works rather well. Alongside Kreator, both the above mentioned bands are interesting cases; the three - on certain albums at least - took thrash as far towards madness as it could go before it became some sort of death-metal, and while by this point the seeds for death metal had already been sewn among those influenced by the more rabid side of thrash, there's no doubt in my mind that records like Pleasure to Kill provided a nourishing soil for these seeds to sustain themselves on. Sure, this strain of thrash sometimes runs into itself a little, or it does when I listen to it, but all in all, there's a good chance that that's mostly my own preferences within thrash doing to talking. It says something about Kreator's skill with composition and musicianship that the record appeals to me as much as it does. Pleasure to Kill really challenges the typical thrash fan, and is all the better for it; you can't count on instantly accessible lead work, or on cruising riffs between the fast sections - instead, you've got to really let down your guard and let the extremity batter you a bit - that's what the modus operandi of records like this is! You're not meant to remember every riff after only a few listens - you're just meant to remember the fact that it made the contents of your brain fall out all over the carpet. You remember the heaviness and the ferocity first - the exact structure comes later.

Does Kreator render Slayer obsolete to me? It's a very silly question to ask, really - the two aren't vying for some prize, and are perfectly capable of both being listened to. If I could only pick one to listen to however - well, for starters I can't claim to know either band as well as I should, but if each album is an argument for listening to a band, Pleasure to Kill is a very strong case, and as odd as basing anything on an imaginary scenario where I'd have to choose between the two, at least it provides a good, if convoluted, explanation of how good Pleasure to Kill is.