The 1980s, I'm sure we can agree, did some very interesting things to rock and metal - some of them dreadful, some of them wonderful. Whether you consider Lizzy Borden among the former or the latter is entirely up to you, but myself? I'm frankly unashamed to deeply enjoy this sort of borderline hair-metal through which I can vicariously live the spirit of the 1980s - and not as a guilty pleasure, either - metal like this is may not be within my listening habits quite as often as the more extreme side of the coin, but nonetheless, I enjoy it easily as much, when the time is right. 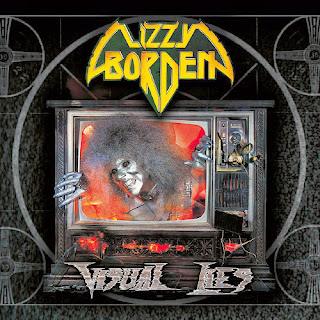 The first thing to bear in mind with a "near-glam" release like this one is that, simply being catchy does not in any way mean it's a "watered down" version of something which would otherwise be a bit more ferocious - some riffs, after all, like the ones on Visual Lies, were born to cruise, not to race along. Pompous, mid-tempo riffs are one of the things which glam did a superb job of - warm, refreshing sonic scenery, coasting along as you nod your head to it. Lizzy Borden combines this with a dash of the properness of more legitimate metal - indeed, it's immediately quite notable that the band aren't generic glam, or in the slightest bit plastic. Sure, there's a bit of the swagger, the catchiness, and even the cheese present, but at the same time, Lizzy Borden are much more sonically interesting than that - both in terms of musicianship and composition. There is, simply put, a lot more going on in this record than any straight-up glam record I can bring to mind. The vocals are probably the most tangible, to my ear, reminder of this - far above the acceptable standard, to the point of nailing that old-school heavy metal virtuoso feel, giving the record a helping of moments which, beyond simply catchy, often journey into the land of being genuinely epic - the last track, "Visions" serving as a thorough demonstration of this fact, hitting lofty highs, while retaining a solid grittiness which is always welcome.

Naturally, perhaps, catchiness is still the most profound element of the music. You find yourself being able to sing along to the choruses from the second listen, with ease, and while many of said choruses are quite accessible and simple, they are, as the saying goes, simple but effective - just about every song has one, but at the same time the recipe doesn't get tired. Some might argue that it's a bit repetitive, and to some extent, perhaps this is true - but it's practically what I'd want an album of this sort to be. Sometimes, predictability makes an album a great one, and not capriciousness, and this is certainly one such record. Visual Lies, for the most part, is the sort of album on which you can chart the path of any given song relatively easily - indeed, you tend to see precisely where the tracks are going. The consequence of this is not mundanity, but a sort of rewarding addition to it's sheer inherant catchiness - piled on top comes a sort of comforting closure - moments of "oooh, I knew it was going to do that" when a song obeys our expectations. The monstrous choruses arrive precisely when we expect them to, and the riffs in-between are likewise intuitive. However, this is neatly balanced with the above-mentioned top-notch composition and musicianship, which creates a record which, while outrageously catchy, is also exceedingly interesting to listen to, as opposed to bland. A great compromise indeed.


And there we have it - some of the finest pomposity and cruising goodness which the 1980s had to offer - a far cry from some traditional metal, I grant you, but also a far cry from the pale imitations of metal which have forever sprung up in its wake - Lizzy Borden is legitimate, and God damn if it isn't some of the catchiest metal I've heard in months.