Before this morning, I'd never listened to more than the few Cradle of Filth songs which took it upon themselves to be background music at various parties, metal bars, or the backs of school busses, issuing from mobile phones with the headphones taken out, as we sent songs to each other with infrared. This morning, however, while pondering what to review, the name darted surreptitiously across my mind - I haven't heard much praise for the band, and while I'm willing to heed the warnings of low-quality, perhaps actually listening and seeing for myself is the answer - it is, doubtless, vital to explore just to be certain. 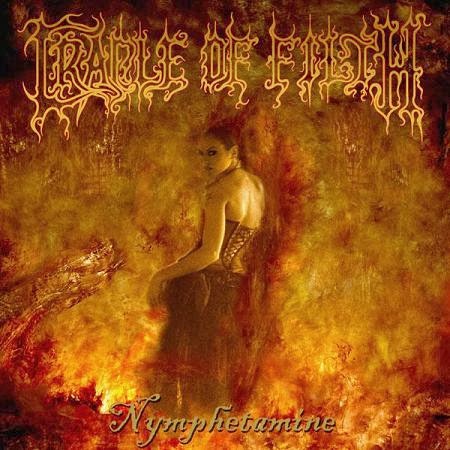 First things first, Nymphetamine is really fucking long, so pack sandwiches. The album clocks in at around an-hour-and-fifteen, which really adds-up when, in the name of scientific rigour, I listened to it three or four times this afternoon. Perhaps the saving grace of this copious length is that, while far from the best thing I've listened to today, the record is far from the grievous offence to my senses that I was expecting it to be, which relegates the band into the land of "acceptable bands who have a number of irritating fans" as opposed to the realm of outright hideousness. Indeed, while it ferociously rams adolescence and angst up your backside, Nympetamine is far from sonically nauseating. Watered down, bubblegum centred teeny-bopper extremity though it may be, when these factors are brushed aside, the album is catchy and relatively well composed. Sure, the band don't set out to make the most vicious black metal (which is just as well, because by this record, there is next to none left in the recipe) and as such, interpreting them as such is foolish indeed, which, sadly, is precisely what happened. Cradle of Filth are certainly a victim as much as a cause; their music usurped by spotty youths everywhere for the grand game of "my band is heavier than your band" one-upmanship competitions by fifteen year olds who listen to "black metal" but don't enjoy...actual... black metal. Perhaps this is the market which Cradle's music is aimed at, but it's certainly not right to write-off the band on this basis.

That said, the record still wasn't one I plan on sticking any gold stars or ribbons on to - it has it's sonic shortcomings, in additional to biased ad-hominems directed toward their fanbase. The synth, for instance, lacks the sort of subtlety which symphonic black-metal sorely needs, giving the record the same thing which European power metal suffers from; that is, being sonic-syrup, and damn does that hurt my teeth. The keys trade in a lot of their potential atmosphere and evocation-potential in the name of simply being more audible, or, as is often the case, more over the top, the lesson of which is runs to the tune of "being more plinky-plonky does not equal being more grandiose" - indeed, there are places on the record which simply sound like someone allowed a horde of lemmings to scramble over the keyboards. This overt synth, unrelenting perhaps to too great an extent, as far as my ears tell me, might be a mistake, although if you know me, you'll also know that I don't especially enjoy bands like Emperor, who do use symphonic elements more subtly and suitably. Aside from this, and the clinical drums (albeit once again less nightmarish than I anticipated), the records production is very much acceptable for what it is - to call upon it to be darker, grainier and more "black metal" would certainly be considering it unacceptable for what it is not.


I have, it seems, failed in my quest to do "one of those" reviews, in which I sarcastically decimate a poor album, but Cradle of Filth have exceeded all expectations, and this, looking at review scores, seems to be one of their poorer records. Granted, I didn't have a great time listening to it, but neither do I suddenly have the urge to vomit down the toilet, and that, defying my expectations, is high praise indeed. The band are tolerable, even if some of the fans aren't - and we've all met some.