Perhaps it's the time that I grew into metal, but bands like Skeletonwitch still seem like young upstarts  - the new kids in town - to me, and this indelible impression often casts a fog over the fact that they've been in the business of metal for over a decade now, and have a number of albums which befit such an age. With age comes wisdom, however, and if you want a lesson in what a consistent and hard working band are like, then Skeletonwitch are a steadfast tutor indeed, and their latest lesson, entitled "Serpents Unleashed" certainly continues the iron rod of consistency running through the band's output over the years. 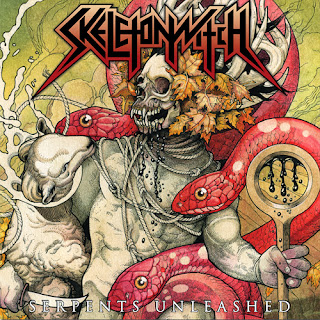 Something I have always valued when it comes to albums is tasteful artwork, and I don't think it superficial to often be attracted to - or repelled from - a record because of the way it looks. Good artwork shows that the band not only care, but are proud of their work. Skeletonwitch are very much a band of that sort; for the last four albums, beginning with Beyond the Permafrost, the records have sat superbly with one another upon the proverbial shelf - they look, in short, like a set, with crisp, fresh and visually stimulating artwork; their records are as fun to look at, and that is something which genuinely makes me not only want to listen to the records more, but really shows that the band themselves are willing to make the best visual impression with their work that they can - something which, as my ears report to me, the band also bear in mind whilst crafting their music. The formula of the record is consistent; in the same way that Bolt Thrower had a run from Warmaster through to Mercenary, or arguably longer, of records which were fairly similar, but subtly grew and expanded, each one with merits, so too do Skeletonwitch. The songs on Serpents Unleashed certainly wouldn't shock or astonish people if it was revealed that they were written anything up to half a decade ago, they certainly don't feel stale either. When it comes to Skeletonwitch, more of the same - even more specifically, more of what you expect - is not a bad thing; You know as well as I do how annoying it is when they change the recipe of those sandwiches you always get in the store, without prior warning.It's not so much that the band keep making the same album again - it's simply that they've managed to sustain a vicious five album long charge without hitting the wall yet.

So what is in this Skeletonwitch sandwich which keeps us coming back to it? Like the previous works, Serpents Unleashed has the blend of balls-out ferocity combined with subtlety which not only makes it doubly listenable, but also succeeds in making it exciting, and in many respects quite innovative; certainly there are bands who blend the two - there have been for decades - but no band sounds quite the way Skeletonwitch do. When the band are going all out, full-steam-ahead, there's the sort of thrashing, scathing blast of music which could strip the wood from a tree like a Gatling-gun, but at the same thing, subtle lead work, tremolos which are genuinely epic - even beautiful - and unexpected structures make the listening experience one which is more than just concerned with heaviness. The band have always had a knack for bringing elements which you wouldn't expect, let along expect to work in a blackened-thrash context, and that's what makes them so thoroughly special; big, old-school solos, riffs with an slightly traditional-metal edge, and all sorts of other goodies lie within the hearing of the listener who is adventurous enough to fully open their ears to what is going on. All of these elements, might I add, are united under a solid production-job which really manages to let the harshness of the bands music roar, the subtleties glimmer, and the whole thing pack a mighty punch without sounding too clinical; a sure success in my book.


So there we have it, and all that's left is for me to wrap up this thoroughly fourth-wall breaking and potentially redundant end paragraph; but nonetheless, something in terms of a conclusion is needed. Serpents Unleashed is, it is quite plain to see, the continuation of a band who have yet to miss a single beat - a band who started the charge a decade ago, and haven't lost an ounce of momentum. Momentum isn't measured in ounces, but even if it was, this album is top-notch.