I've been meaning to review "The Cusp of the Void" - the new album by US black-metal innovators Dalla Nebbia, for quite some time. Presumably since the moment I realised it had been released, which seems to have been back in mid-October. Late to the party I shall admit to being, but simultaneously the bands previous EP "Thy Pale Form" gave me easily enough of a taste of their potential to know that this was a party that I needed to get around to. Tonight, I plan on submersing myself in Dalla Nebbia's music; if I can, trying to spew forth a few meaningful sentences about it for you to read and, if I'm to be optimistic, enjoy reading. 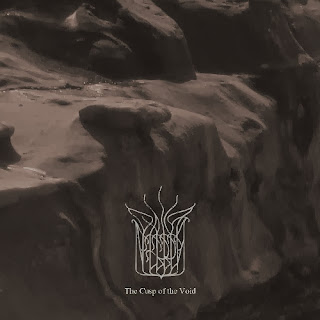 To those who haven't heard the band's music before, Dalla Nebbia can be best described in their own words; "Dalla Nebbia is a far-cry from the corpse paint and spiked gauntlets of the Scandinavian orthodoxy... ". Correct they are indeed, to say such things. If my remit as a reviewer were simply to say what bands were not, however, despite a few amusing scenarios, I suspect I wouldn't be doing a very good job. So, I must ask myself - ask what my ears tell me about the music - what are Dalla Nebbia? There are a lot of words which fly around at my fingertips; the music Dalla Nebbia create is intricate, unorthadox, innovative... but now, on this album more than ever before, Dalla Nebbia feel musically fascinating. Like every listener, I suffer from a certain disability; I have not listened to every band in the world, but of what I've heard of the music out there, Dalla Nebbia's work sounds like none of it. While obscure, Dalla Nebbia sound like nothing I've heard before, and certainly deserve a place among the poster-children of black-metal's sheer ability to experiment, innovate, and create new, chimerical wonders. Sonically, The Cusp of the Void certainly sounds like it's on the cusp of something legitimately creative and fresh; every pulsating piece of guitar work, or unexpected swirl into the unexplored feels legitimately rewarding to listen to, and, as I say many times over, truly represents the influence of progressive music upon the genre; it sounds like it has progressed towards somewhere, something new and exciting.

As it stands, I'm never too good at hearing what instruments are actually doing, but one thing I can definitely hear is that Dalla Nebbia do things a bit differently; their interpretation of black metal is like a hazy, mournful summer-dance; writhing, undulating and shimmering, with a heavy emphasis on lead-guitar work, in terms of both relatively high-pitched, wailing riffs, and solos which genuinely exude the sort of atmosphere which so few bands tap-into the potential of. Sweeping statements about the record are difficult however, as every track feels a little different from the others - truly diverse and difficult to generalise - and perhaps that's a good thing indeed, for despite it's diversity, the album also flows very well through its course, and thus the diversity is not arbitrary, but legitimately welcome. Every flourish of experimentation feels like a fresh idea in the mind of one of the main songwriters, and the album certainly keeps bombarding you with dynamic and sonically interesting ideas throughout its course, without ever simply sinking into the musical equivalent of thinking-out-loud, which some of the more experimental bands within metal seem to risk on a daily basis. Of course, The Cusp of the Void is composed of tracks from the band's Demo and EP, so it is only natural to compare these new renditions - my verdict? The fact that the band is a full four-piece certainly gives the material a fuller sound - perhaps even a new lease of life, and with thicker production, the tracks have become the songs they were born to be; they seem fuller and more alive.


Dalla Nebbia's full length début is, without a doubt, an extremely interesting and solid piece of black-metal craftsmanship, and one which definitely furthers my interest to hear more from the band - while it is composed of songs which have been heard from them before in one form or other, it is nonetheless splendid to hear them again, rejuvenated. Hopefully interest in the band's work will grow, and their sound will flourish, because as well as being novel and exciting, Dalla Nebbia's music deserves to be heard.