As soon as everyone saw the cover artwork, everyone seemed doubly curious - perhaps even anxious, to see what Empires Collapse, the fourth record by Warbringer, was going to sound like. The band professed to have decided to do something a little different for the visuals, and I was curious, as I'm sure many were, to see if the same ethic had been applied to the band's trademark thick, modern thrash. Had it also undergone some innovation and stylistic wandering? A few days ago, a package came in the mail which answered these questions thoroughly. 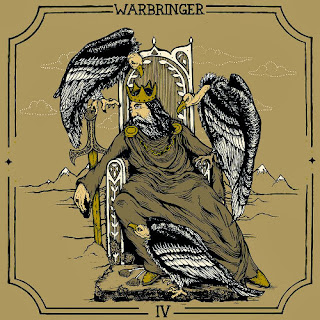 While I'm certain that metal is still full of undiscovered surprises, by this point, we've worked out that when it comes to the evolution of a band, there are roughly two directions in which they can go; they can become more extreme, or they can become less extreme. You can imagine my surprise and interest to discover that, somehow, Warbringer has done both. In Empires Collapse, you immediately get the impression that the band have cast aside any nonsense with which they might have been preoccupied, and made the switch to leaner, meaner version of what they do. Like the artwork, Empires Collapse doesn't deal in the superfluous - it deals only in tight, efficient thrash. The result is damn crushing at times; fiercely percussive and ferocious, with gnashing and rhythmic pounding riffs and bridge sections which remorselessly beat you into submission, with everything from low-tempo borderline-breakdowns to unrelenting blasting. Warbringer have, as it is almost impossible not to these days, heard the call of extreme metal and given it a comfortable home within their sound. While it was beginning to raise its head in Worlds Torn Asunder, on this record it truly comes together, both compositionally and sonically at fruition, with the harsher, more vicious edge of the bands sound really coming to the fore. The result is something legitimately explosive, darting between swift, conventional thrash sections, and slower parts which really explore what the mid-tempo can do, with churning, rumbling sections propelled forward by vicious ride-cymbal battering, and head-whirling.

At the other end of the spectrum, the band are also leaning towards a slightly rock n' roll edge - catchiness has certainly risen somewhat since the last record, and in general, there are certainly traces of metal's pre-thrash edge embedded within this album, particularly in terms of the solos, which really do what solos have, in these times, moderately forgotten to do; that is, to really weave and swagger around, decorating the song with something which, for thrash's purposes, sounds distinctly badass. Indeed, the odd juxtaposition of the record is that Warbringer are experimenting more and sounding darker, whilst also sounding more fun. In terms of the riffs, too, there's certainly a degree of experimentation - perhaps not covering ground which is new in it's own right, but definitely ground which is  brave for a band who made their name making what was, initially, fairly retro thrash. While Warbringer have almost never felt generic, they certainly seem to have really come out of their shell on this album, and are much more content to play merrily with tempo, outside influences, and most of all, atmosphere - of the bands in the thrash revival, Warbringer conjure some of the thickest and most tangible atmosphere in their music, with a crushing tone which carries more than simply energy, but also feeling; a really distinct impression of explosive ferocity, extremity and swagger which the music brings to the fore, but the guitars aren't afraid to leave a little dismay or fear, either - the band capture thrash's violence extremely well, but also manage to be twisted, joyous, and even mysterious - and all the better for the production job which this record has, which, modern as it is, really suits being so.


It's obvious that these days, especially in a genre like thrash, which has stagnated itself nearly into oblivion not once but twice, that bands who wish to stay on top have to either be very good at making thrash, or very innovative with the sort of thrash they make. I think it's safe to say that on Empires Collapse, Warbringer have tried their hand and succeeded to an extent at both; while the record is still a good old fashioned sledgehammer blow, it's a sonically interesting one too.