I'm not sure whether a Mammoth Grinder is an exceptionally large grinder of some sort, or a thing which is capable of grinding mammoths, but of either of these, Mammoth Grinder's music is a certain sonic equivalent. Heck, for all I know, it might be the sound or a mammoth grinding other things - all I know for certain is that the name is the sonic counterpart of something enormous, and the band has unleashed a third record this year, to which I now turn my attention. 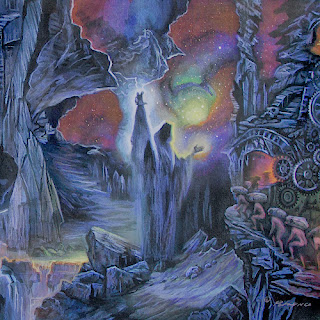 It is perhaps the highest praise I can give, given how superb the artwork is, to say that the music is easily as good as it. Mammoth Grinder take, nowadays, a no nonsense and thoroughly rapid fire approach to punk-steeped death metal. Underworlds is akin to having ten short, to the point tracks catapulted at you by a firing-squad of ferocious d-beat enthusiasts. If you're not familiar with my personal preference as a reviewer, I assure you that I, for one, fucking adore d-beats, and fortunately, along with all of those other tasty, fist-pounding percussion styles associated with great old-school death metal, it seems Mammoth Grinder love them too. Underworlds isn't about excessive or gratuitous technicality or complexity - no - their music is, as plain as the light of day, composed of grooving, crushing, skull-fracturing old-school steak-pie flavoured rage - enough, I dare say, to make bands like Entombed and Autopsy very proud indeed, particularly the former, whose influence is very apparent on the record, but simultaneously not overwhelming in the way that so many bands simply mimic them down to the very effects pedals. Mammoth Grinder are, instead, from the onset their own masters, and not a clone-band of any sort, combining the glorious crunch of old-school death metal with a touch of hardcore ferocity and bite to weave what I can only describe as a paradigm case of what extreme metal should be all about - energetic, crushing, and thoroughly onomatopoeic with regards the interweaving of their name and sound.

Like the excitement you feel when you first listen to a really solid Entombed or Bolt Thrower record, Mammoth Grinder really offer a window into the unique emotion of "the riffs, the riffs..." which only top-notch albums can provide. Cliché as it may be to use the word, the riffs legitimately are slabs of heavy goodness; combining the a crushing sound with the sort of swagger which is extremely rewarding and stimulating to listen to, all the while without sinking to the level of simply being a Swedish-style death metal clone. The riff work, which really predominates the record musically, is certainly the kind which even some really good death metal albums don't manage to reach, such is the level of craftsmanship. Indeed, the whole album, artwork included, really has that feel - there are albums which really claim a certain legitimacy for how well put together the whole package is, from musicianship to artwork right through to production, and Underworlds really does seem to boast all of them, which certainly gives the album a gift of solidity and presence; this is not just another old school death metal album, it is, in fact, one which is well worth taking seriously. Sure, it's only twenty-eight minutes long, but in that time, it manages to rampage headlong through ten tracks which all sound complete - indeed, the album itself feels very complete, and while it whirls past before you've managed to finish your beer, that might be the best way for it; good things come in small packages, and if this album were to be standing at a bus-stop, it would definitely be making the other death metal albums standing around feel awkward for being overly long and more intricate than they need to be.


The mammoth itself may be extinct, but Mammoth Grinder go one hell of a long way to proving that good, old-fashioned bludgeoning no-nonsense death metal is far from extinct. If you have any love for death metal at all, and twenty-eight spare minutes, you literally cannot go wrong by lending your ear to the subtle strumming of Mammoth Grinder.