As much as I like to cultivate the impression that I somehow have my "finger-on-the-pulse" of the most recent and hubbub-inciting records out there, I, and hopefully many like me, can find just as much enjoyment in the classics of old - the records which are not only older than me, but undoubtedly kick more ass, too. Sometimes, especially at a busy time of year like this, I forget to take my eyes away from new releases and remember the fantastic landmarks of the past, the sound of which still reverberates through the halls today. That was, until earlier today, I took a trip to a certain church. A certain Metal Church, and was absolved of such sins. 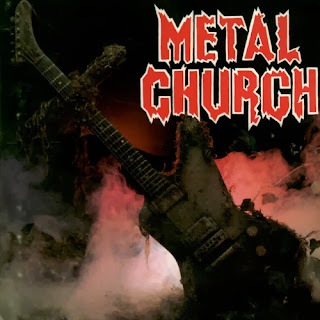 Everyone has the sound which they thought metal had before they got into metal. If everyone is like me, however, they have only faint memories of what they thought that sound was. Supposing I was to dive into my memories and find those thoughts, however, I suspect I would find something a lot like Metal Church; long haired, screaming gentlemen in denim and leather, wearing sunglasses indoors, to the sound of deafening electric-guitars, shrieking but melodic vocals, and slightly alarmed parents. It is to that description that I would appeal if someone were to ask me "What are Metal Church like?" We're all fetishists for rigorous genre-labelling 'round these parts, but Metal Church offer more of a challenge than some bands; I'd describe them as speed metal, but I doubt that would stand up in a court of law - likewise, they are neither quite explosive enough for full-blown thrash, or gentle enough to be considered a purely traditional-metal affair either. Ultimately, I retreat to my previous saying; Sunglasses indoors. The bands work is, however, definitely not a lonely island in a sea of styles; quite the opposite in fact. More akin to a busy and flourishing intersection, the band's self-titled début album brings everything there is to love to the table; energetic, head-banging riffs, with catchy-hook after catchy-hook, propelled forwards by vicious and razor-sharp vocals which ride the line between scathing and melodic perfectly, while snarling and shredding their way through infinitely memorable choruses, such as the great showcase on "Hitman".

Metal Church is the sort of album - the sort of band - that while listening, you can really imagine the band swaggering confidently and energetically around a stage somewhere, with a blaring-backline and vigorous crowd. It's always a plus when an album manages to capture this sort of natural, undaunted-by-the-studio feel and the band's true, enthusiastic energy for you to enjoy in your dingy, adolescent bedroom while pretending that your hairbrush is a microphone. The blend of rocking and stomping with the added energy and fire of thrash really is a winning formula, and a shockingly addictive mixture. Every chorus, every solo, and every riff feels like it belongs, and indeed thrives in its place, it's the kind of album - a classic by my reckoning - that doesn't waste a moment of it's running time, and that really shows through in just how often I've been listening to it. It's quite unusual for me to have an album dominate my listening these days, let alone a band, but Metal Church's eponymous effort does precisely that, with its crackling electricity and maniacal, frantic edge, both of which make the style, as it indeed was at the time, sound like the work of some mad, innovative genius - it has the roguish, wild-eyed charm which truly epitomises not just metal, but rock n' roll as a whole. The record is easily one of the catchiest and most earnestly energetic in my collection, and while bands have played faster and played heavier, nobody have played quite what Metal Church can play, and the and are all the more precious a gem in metal for it.


Metal is a constant, and I'm damn glad of it, but we are so often reminded that, in those age-old words; there's no school like the old-school". It's albums like this, I can safely say, which give that statement it's weight and power, and for good reason. Metal Church is a fantastic début by a band who, I can happily say, continued to deliver the goods.