As far as I'm aware, Hail of Bullets don't really think of themselves as a "supergroup", and neither do they consider themselves a "side-project". In fact, they very much seem to like their work to be taken for what it is, and not compared to other bands, which is, frankly, only common courtesy on the part of the listener and reviewer. Fortunately for this point of view then, I discovered Hail of Bullets before any of the other bands which the members are involved in, and while my taste has broadened since that time, you can count on a new Hail of Bullets album to get me excited. What sits before me is precisely that - their 2013 record III: The Rommel Chronicles, and now, the time has come to see if I can say anything about it. 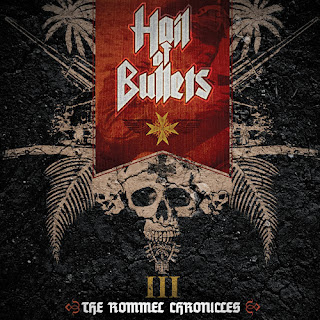 I've listened to the last two Hail of Bullets albums fairly thoroughly by this point, considering that "On Divine Winds" was literally the first death-metal record I bought. As always in such instances, when album number-three comes along, it always takes a little while to settle in and feel "part of the family" of the bands discography. Nonetheless, what the album itself offers is, straight away, as clear as day. It offers a third helping of the Hail of Bullets we know and love; old-school, intense and at times extremely evocative death metal. The band seem to have mined a very rich seam of creativity on this record, and it certainly has a little extra punch with regards to song-writing when compared to its predecessor, On Divine Winds. The tracks are a little bit more dynamic, with more inventive and distinctive twists and turns - more lead work, more atmosphere, and more well-deployed solos. Yes indeed, The Rommel Chronicles is a damn solid album. It doesn't always rush for the throat in the way that predominated a lot of the previous work, but it certainly doesn't refrain from doing so either; there is a good blend of churning, atmospheric mid-tempo and roaring, rushing death-metal glory, thundering like a division of armour at full-speed ahead. The drumming on this record feels a little more punchy and produced than the last two albums - or at least, more prominent in the mix - and it certainly helps to propel the songs along viciously through both the slower and faster parts. While usually I'd find such a drum sound a little bit too clinical, it seems to work reasonably well in this instance, as does the albums relatively modern production as a whole.

The crowning feature, perhaps, of the album is the aforesaid atmosphere which it brings; both Of Frost And War as well as On Divine Winds had an exceptional atmosphere, really representing the carnage and twisted metal of warfare, but this album takes similar elements; crushing tone and clever lead-work, to turn this same atmosphere up to eleven. Of the three, this album certainly feels the most steeped in feeling - the lead work on tracks like the opener - Swoop of the Falcon - really carry a tortured, warlike shriek in the lead guitars, and a savage rasp in the rhythm - for my money, the most course and grainy the band have sounded to date. The near-trademark Hail of Bullets tone is, clearly, undergoing a process of evolution - to my ear, with even more attention to detail when it comes to weaving an air of carnage and devastation to the music, but also sorrow and desolation, on top of the usual gunpowder and flaming debris. All of Hail of Bullets' albums so far are concept albums about the second world war, and this one is no exception in so far as it doesn't have an especially happy ending for anyone involved - to avoid a history lesson, I won't give an exposition of Rommell. On top of the atmosphere, the solos are fantastic - extremely agile and genuinely enjoyable on their own musical merit - some albums manage to pack solos which are legitimately fun to listen to, making you imagine the work which goes into making it happen, and appreciating their dexterity - and this album has a lot of those - proving concisely that anyone who thinks adept solos have no place in death metal is entirely wrong.


As you could no doubt tell, and should have expected in the first place, Hail of Bullets once again live up to their reputation as deliverers of fantastic old-school death metal, and in a world where a lot of death-metal has become generic, uninspired and unexciting, I can safely say I'm glad that there are bands out there flying the flag high, crushing the non-believers under iron tank-tracks. This is true death metal, ya bastards!