If you are a false don't entry. The nuclear drums will crush your brain, because you'll be burned and died.

If you're unfamiliar with Sarcofago's work, the chances are you'll still have heard this phrase batted around enthusiastically throughout the metal community. The landmark album I.N.R.I, however, is where it all began for those infamous words, and, perhaps more importantly, where one of the mighty cornerstones of extreme music in the 1980s. 1987 was a year in which Mayhem gave us Deathcrush, Bathory gave us Under the Sign of the Black Mark, and chronologically sandwiched somewhere between the two, came I.N.R.I. All in all, I can imagine it may well have been quite a good summer. 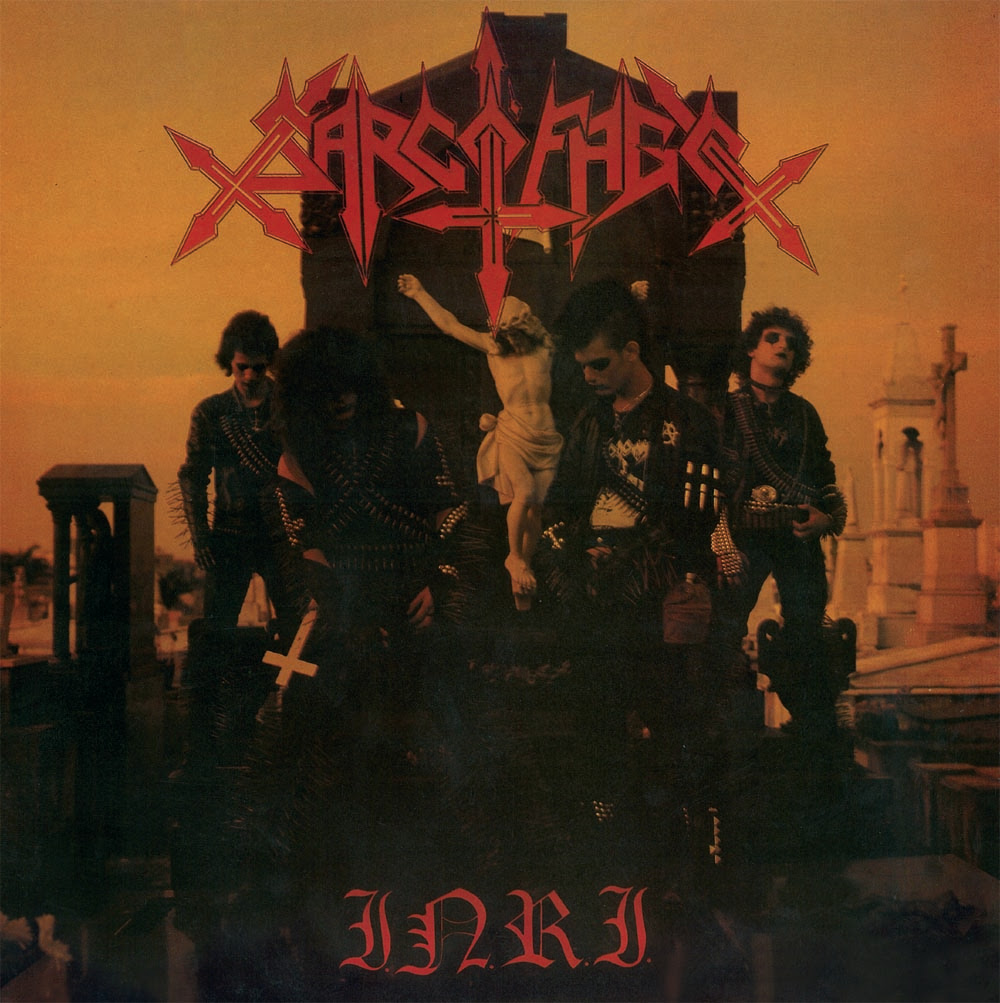 Sarcofago have an admirably down-to-earth formula when it comes to I.N.R.I; they simply push the blasphemous and extreme edges of thrash as far towards its natural limits as possible, and for my money, do and damn good job of it. The album is both for it's time, and to this day one of the most venomous, chaotic and vitriolic records out there, with a crudeness and rawness which set the scene for a vast amount of nasty music to come. Perhaps representing the middle-ground of the mighty first-wave-black-metal records of 1987 (if indeed it can be considered part of that), I.N.R.I. lacks the huge grandiosity of Bathory, while remaining less murky, and considerably more competently played than Mayhem's work of that year. As opposed to being an album explained in terms of what it lacks, however, it is very much one which brings it's own evil to the table - I.N.R.I is filthy and vile, and not even a little bit sorry about it; riffs which sound like Hellhammer dipped in something corrosive are accompanied by frantic but neat blasting and the pounding of nuclear drums. The vocals, too, epitomise the aspiring extremity to which metal was headed at the time - rasping, aggressive and at times augmented by backing vocals so demonic and rumbling that if you were to take this album to church and have it confiscated, the preacher would probably exorcise it before he threw it away.

It's with records like I.N.R.I. that you really begin to see black-metal being born as a style; you can feel from the onset that the album is, simply put, moving beyond the edges of the map with regards to thrash, and, like similar artists of the day, the part of the strange, uncharted land they landed on was the embryonic ooze from which later black-metal would emerge, along with black-thrash, and all sorts of other evil denizens of the underground. To this day, countless bands forsake the more "refined" Scandinavian black-metal sound in order to pay homage to the predecessors of that sound - bands like Sarcofago. I digress from the album in question, but hopefully the exposition is welcome, as opposed to tedious. Either way, I.N.R.I. is, I think it can safely be said, one of the most significant extreme metal albums of the eighties - perhaps not genre-pioneering in a strict sense, but hugely important. If you've ever watched a film which has become iconic in terms of the sheer number of quotes and references which float around discourse, all the while realising "oh, that's where that is from", you may well experience a similar feeling when first experiencing I.N.R.I. As someone who came upon Sarcofago having listened to quite a lot of extreme metal first, I expect a lot of the monumental impact of the record is splattered against the shield of desensitization to extremity which most metalheads build up, but nonetheless, the record truly does feel adventurous - if I'd been into metal in 1987... if I'd been alive in 1987, you can be damn sure that I.N.R.I would be the record which I hid under the floorboards in case my parents saw it, and only listened to very quietly while everyone was asleep. There's something special about metal which puts you in that mindset, and I can promise you that Sarcofago deliver that feeling by the truckload.

Are Sarcofago overlooked? I'm not certain - I expect fewer copies of I.N.R.I. are in existence than, say, Deathcrush or the seminal works of Bathory, Celtic Frost or perhaps even Hellhammer, but as soon as the music on the record explodes forth from wherever it's playing from, it comes with the assurance that Sarcofago are every bit as deadly, every bit as wild, and perhaps every bit as significant. Those who appreciate at all, appreciate Sarcofago.