I've been in the mood for black metal for the last few months, and judging by how cold it is outside, it's probably the perfect time of year for it. Today's listening specifically is the relatively underground work of Polish band Mgla. I can't remember how I originally came to hear of the band, but for a long time they were on my mental list of "I should listen to them at some point". As with many such entries on the list, when I properly investigated the band a few days ago, they moved from that list right onto the "I should have listened to them a lot sooner" list. Let me tell you why... 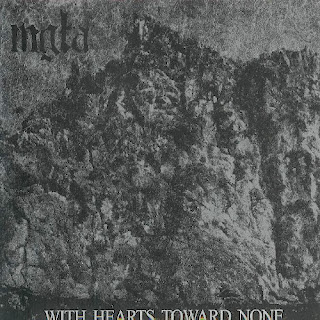 Black metal varies wildly in legitimacy - perhaps as much as the very multitude of forms and mantles black metal takes upon itself these days. Granted, all music is made to be heard, but in such a way, all cigarette lighters are made to light cigarettes - but there is a vast gulf between the well-maintained Zippo and the disposable plastic lighter you found on the stairs, and as much as both serve a purpose, there are many reasons to prefer the former for it's sheer legitimacy.When it comes to legitimacy, Mgla seem to set at the very high end of the spectrum; from the first tremolo of the record right through to the conclusion, you get the feeling that your sonically contending with the real deal, for want of a better phrase. For me, at least, I can testify to the band really managing to capture and induce in me that excitement which you feel when you first discover black-metal, and hear that first Mayhem or Burzum song, which has you running around the room with excitement about this new, dark and almost secret thing you've stumbled upon. The atmosphere on With Hearts Toward None is thick, dark and almost luxuriantly scathing; layers of tremolo, generously placed, and a thick, velvet fuzz cocooning but not muffling the whole affair, while the drums below are vicious and crisp, propelling along this fuzz-laden shadow of sound like a cruel coach-master driving satanic horses. The result is something epic, flowing and with black-metal's most desirable vast scale.

The combination of elements which Mgla's music possesses is a very rewarding and pleasent one to listen to; the rich atmosphere combines superbly with the tremolos which stand perfectly astride the bridge between hypnotic and dynamic, resulting in something which has in equal measure the ability to draw you into the music, out of yourself, and at the same time impress you with delicious and unique tremolo structures which really set the band apart from other artists of the same type. The whole record carries an incredible, sermon-like majesty, not only in terms of the snowy, regal atmosphere, but also the vocals, which carry an incredible, echoing presence - victorious, proud, sinister and deeply atmospheric; the whole record feels drenched - steeped - in the occult, in darkness, and in a layer of unforgiving frost. There was a word which I heard once or twice in regards to Mgla's music, and that word was "ritualistic". It was an apt description indeed, and one which summarises the record well; there is a feeling of crescendo, otherness and liminality throughout the whole work - a feverish enthralment and juxtaposition; the vastness of the cosmos, and the darkness of men's souls, entwined in a shimmering, shining maelstrom of wide-eyed fascination. It might be an old cliché, and often something which every black metal band proclaims about their work, but With Hearts Toward None truly does feel like a ritual.


It's been quite a while since I listened to a black metal album which left me feeling quite so spellbound and excited; after hearing With Hearts Toward None, I have stumbled upon a band who truly sent me back to the place of great anticipation and awe which the classics of the genre sometimes sent me to, and few albums can do that. This one is something special.