Part one of two

There's always been something greatly enjoyable about listening to a lot of a band's discography, or all of it, at once. Well, not at once, that wouldn't sound very nice; but certainly listening to it in order carries a lot of fun with it. A few months ago I decided I might do features where I reviewed discographies, instead of just lone albums, and for some reason, I decided to start with Darkthrone. A few months later, of realising I really don't quite have enough hours in the day to do the band's whole discography, I've decided to break the marathon into two more digestible sections. Cheating, essentially, but it seemed to be a choice between doing it this way, or not at all. 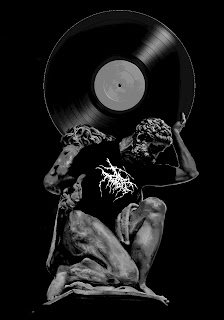 As a band, Darkthrone really need no introduction; one of the most hard-working and productive pillars of the Norwegian black metal scene, and more recently of the Norwegian metal scene in general, Darkthrone have a discography which is fantastically varied but all utterly Darkthrone. Interestingly, I suppose the marathon begins with the album which sounds the least close to the band's trademark sound; Soulside Journey. 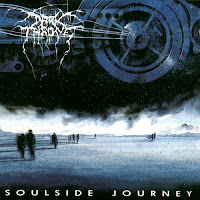 I don't exaggerate when I consider Soulside Journey to be among my favourite death metal records, and merely on the basis that it's not the music which Darkthrone are famous for is never a sufficient reason to dismiss it. Soulside Journey is murky, churning and thoroughly evil old-school death metal; technical, and compositionally quite ingenious. It's the kind of album which can draw you in susprisingly well, and it certainly showcases the penchant for evil-sounding music the band had which would certainly be dominating their music later on. The resultant eerie death metal is well deserving of a listen by anyone who has dreamed up reasons not to have listened already. 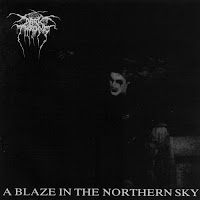 I first listened to A Blaze in the Northern Sky on Halloween, in the dark - I wanted to listen to some dark music, and this album provided it excellently. People who really enjoyed Darkthrone on the strength of Soulside Journey must have gotten quite a shock indeed when they heard A Blaze in the Northern Sky - a very, very different monster indeed. Instead of thick but solid production, the album is incredibly rough and fuzzy, with a guitar tone like electric sheep-shears which, instead of sounding amusing, succeeds in sounding fantastically evil, accompanying the scathing vocals. Of all of the bands records, this is the most diabolical, and the long songs certainly help it achieve a sort of satanic majesty. 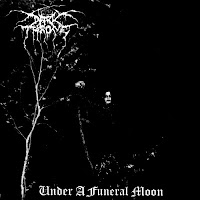 By the time that Under a Funeral Moon came out, black metal was very much coming into its own - a fact which is reflected in this album's recipe. While the embryonic take on black metal that A Blaze in the Northern Sky created is still present, on this record the songs are shorter, and altogether feel closer to the emerging "convention" of black metal. Under A Funeral Moon is, of course, not derivative in the slightest, but was instead a setter of this convention. The combination of retaining the previous records dark majesty and scathing guitar tone, and combining it with a more punchy, rapid-fire approach creates what is, quite possibly, one of my favourite "classic" Darkthrone records. 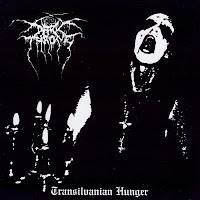 Transilvanian Hunger was the first Darkthrone album not to feature guitarist Zephyrous, and you can sort of tell; the record manages to be atmospheric, and indeed even more intense and evil sounding than a lot of Under a Funeral Moon was, but at the same time, it's not quite the same; not a bad different, but nonetheless different, particularly with regards to the style of lead guitar. As an album, Transilvanian hunger is more aggressive, and is typically very unrelenting; a characteristic in which is outdoes every other Darkthrone release with relative ease. While I prefer the atmosphere and more hook-laden feel of Under A Funeral Moon, this album is generally likewise a great pleasure to listen to. 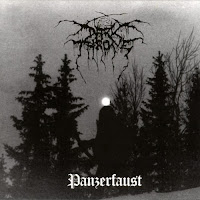 Panzerfaust is something of a continuation of Transilvanian Hunger, with the subtle difference that the band remembered that they were allowed to play slower bits too. If the previous albums were icy, Panzerfaust feels more akin to snow; velvety, and with the same chill, but much more primitive and primal; songs like Quintessence feel at once hypnotic, wrathful and powerful. The vocals on this record are loud, but lack the scathing, demonic feel they had, particularly on Under A Funeral Moon, perhaps the main cause for the album feeling more enraged than occult. Consequently, the real draw of the album for me, at least, is that the riffs are extremely raw and pronounced, packed with energy and intensity. 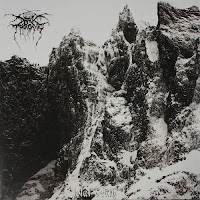 I quite like Total Death. It may represent the beginning of the "wilderness" which Darkthrone vanished into during the late nineties, but I still enjoy it as an album. The magic of the first five records isn't quite oozing out of it, but at the same time, it still has a certain feel of cohesiveness and bite. There are snowy melodies in the same vein as Panzerfaust, but also an inclination further towards more simplistic, old-school forms of black-metal, namely the first wave, with riffs in that style making themselves known every now and again, perhaps representative of Fenriz' deep attraction towards the old-school beginning to push aside and transform any concious affiliation for the second-wave black-metal scene. 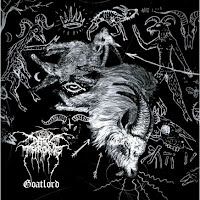 I'd probably never listen to Goatlord other than to find out what it sounded like, or whilst I'm doing a Darkthrone marathon... The whole premise doesn't appeal to me; It's a rehearsal tape from before A Blaze in the Northern Sky with a few finishing touches placed upon it. All in all, while you get the feeling that the music could have been great, the recording quality doesn't do it any good, and the finishing touches too, can at times feel a little clunky, like the "female" vocals which probably aren't. Goatlord always felt to me like a line in the sand of Darkthrone's discography; the "old" Darkthrone before it, and the "new" after. All in all, it's a diamond in the rough, but most of the time, the rough feels just too rough. 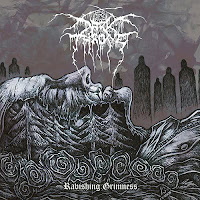 Albums like Ravishing Grimness can't really be written off as "more of the same", quite simply because that's not quite what they are. Like much of the "middle era" material, Ravishing Grimness is a swaggering, extremely course and primitive work; in this case, it manifests itself sounding like a slightly concussed version of Panzerfaust, where each chord in many of the riffs and rhythms are  emphasised to give it an enormity. Like Panzerfaust, it manages to dynamically flit through various tempos, and certainly maintains a very true black-metal sound, albeit injected with a bit of piss and vinegar, especially tracks like "The Beast" which really foreshadow the direction the band would soon take.


And so, the band's course through the nineties was examined. But what happened after that? Well, It's taken quite a while to write this, and there are many, many more albums to look at, so I'm going to take a break, come back in a few days to tell you about those.

I hope you've enjoyed this so far.