The lasting legacy of the thrash-revival, or indeed any of the recent resurgences of self-proclaimed "old-school"genres is that metalheads have become a harder and more critical audience to appease; modern thrash is no longer the free-for-all it might have been five years ago, but is instead a meritocracy, with the more generic acts slowly running out of steam. In this climate, I can safely say that I was a bit surprised that a brand-new band in the movement had popped up, and indeed with quite a lot of even the most jaded metalheads taking notice. The band in question are Finland's "Lost Society" and their début album Fast Loud Death. 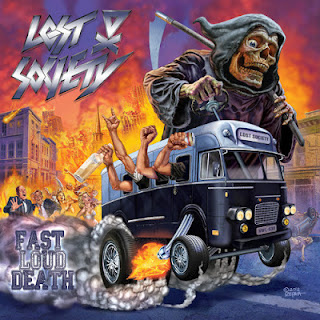 The statement of intent that the album artwork makes is almost instantly clear; fire, death, scantily clad women, and annoyed-looking men in suits? The album is going to be very, very retro. It certainly helps that it was painted by Ed Repka; one of the most iconic artists in thrash, and responsible for bringing to life iconic albums by Megadeth and Nuclear Assault. Musically, the band likewise stay very true to the spirit of thrash, that is, playing exceedingly fast, maniacal music indeed. There are plenty of moments on the record which really make you sit back for a second and think "fucking hell" - a nostalgic moment indeed, as it was what thrash bands were making me thing when I first discovered acts like Megadeth and Testament when I was about fifteen. Lost Society are absolutely explosive, to the point that attempting to band your head without prior knowledge of the song structures is risky. The resulting concoction is very intricately written, but also smooth flowing, with a good ear for melody, something which I've heard plenty of people mention that the thrash-revival generally lacks, and I'm inclined to agree. Lost Society manage to properly deploy catchy hooks and vicious bridge-sections and lead-guitar work to create something which is mind-bendingly dynamic; it's sort of like Warbringer's "play conventionally, but extremely technically" recipe, taken to the extreme, and with an added pinch of recklessly trying to make everything faster than it already is.

I think it's very much a case, of which I will hold that there are a few, that a thrash-revival band stands out from the crowd not for being super innovative or fresh, but for being incredibly good at playing old-school sounding thrash - Fast Loud Death seems to be Lost Society doing just that; It might not be re-inventing anything, but it's considerably more enjoyable than a lot of the thrash releases to appear after the millennium. Another particularly interesting feature of the band's sound is their attention to groove; not in an unfortunate gym-dwelling kind, but instead an adept, and extremely agile kind, which compliments the thrash spectacularly, and helps your brain have a rest after trying to keep up with the fastest sections, not unlike Overkill's later material, or Pantera in the brief window before they were shit. For the majority of the album however, the real source of wonderment is how fast the band manage to play whilst remaining tight - in the vein of bands like Anthrax at their fastest, or the head-over-heels guitar-mashing of Megadeth's Killing Is My Business album. On the other hand, the band do an a good job of sounding different. Sure, there are elements of all of the bands I've mentioned in their sound, but at the same time, they sound reasonably interesting in their own right, and while there have been very few truly original bands in the thrash revival, I think I can safely say that Lost Society come across as being among the very best of the rest. Slightly puerile, perhaps, but very accomplished.


Maybe in many contexts, Fast Loud Death is just another thrash-revival one, and one arriving at the tail end of it, at that, but don't let that put you off listening to it; I wasn't sure how good it was going to be, and I suspected it would be fairly mundane, but fortunately, I took the time to check it out properly, and was pleasantly surprised; it's very, very solid, and while it might not be novel, it's the eighties distilled into an extremely potent extract indeed. Probably the most fun thrash-record of 2013, by a good margin.