As I mentioned at the time, the reason I didn't include The Underground Resistance in the Darkthrone marathon of a few days ago is on account of how new it is, I felt I should write a review of it in-full. When the album originally came out, some months ago, things kept getting in the way of me reviewing this album. Fortunately, the side-effect of this is that I've now had a lot of time to listen to it properly, and hopefully make a few observations about it which I might have missed in reviewing it a few days after I got it. 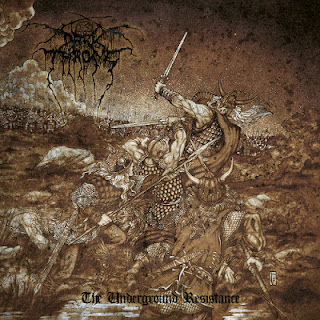 As a record, The Underground Resistance is a bit of a microcosm for the band's career as a whole; it varies a lot, but all carries within it the essence of Darkthrone, through and through. Once again, the record is different to it's predecessor, but carries on certain parts and styles; in this case, the traditional heavy metal elements of Circle The Wagons are turned up to eleven, and further squish out the punk and black-metal parts, which, whilst both present in trace amounts still, are really taking back-stage compared to the riff-tastic speed-metal. The guitar tone is warm and chunky, and the riffs are quirky and angular, coiling more tightly than the work on the previous three or four records, and cruising along with a degree of brooding majesty, creating an extremely catchy record, especially the winding, idiosyncratic work on songs like "Come Warfare, The Entire Doom". In fact, the riffs in general bring with them a pretty hefty thud and crunch, with a richer sound than the band have conjured in a long time; the lower-end, for instance, is more earthy than anything since Soulside Journey; crisp, clear and fluid, while retaining the trademark Darkthrone rough-edges. The drumming too, feels like a real showcase of just what Fenriz can do when he gets behind the drums, and the production really captures a percussive, but not overly clean sound. Of course, if anyone knows how to make a record sound overtly old-school, it's probably Fenriz and company, and it comes as absolutely no surprise to me that the band have succeeded with this one; the production and actual substance of the record go hand in hand very well indeed.

One of the things most obviously amplified since Circle the Wagons has been the clean vocal approach, and a good number of the tracks on the record have Fenriz really giving it his all with regards to clean vocals, of the kind of quality they were in his best moments with Isengard. Tracks like Valkyrie really take Darkthrone into a deliberately epic and grandiose place which they haven't explored in quite the same way before, and I can safely say it's one of my favourite tracks on the record,  a record which, incidentally, doesn't have much in the way of filler. It's quite hard to have any filler when it's only six tracks in length, but fortunately, I think it's safe to say that there isn't really a weak link among them. I had initial misgivings about Leave No Cross Unturned; the fourteen minute behemoth of a closing track, that it might be a bit longer than it's content should really justify; but after a few listens, it's length suddenly doesn't become an issue, which is really the best way to approach the record. A single listen doesn't quite work, and neither do a few; you've got to really get to know it to appreciate some of it's intricacies and it's overarching character, but when you spend some time with it, it's really potential to be enjoyable is unlocked. It probably says a lot about the bands influences that Manilla Road are similar in this regard; you can't listen to a Manilla Road album once and get it.


So there we go - the culmination of about a week and a half of me reviewing nothing but Darkthrone. The Underground Resistance has certainly been one of my favourite records so far this year, and once again, as they do on almost every record, Darkthrone have managed to capture the spirit of people making music because it's what they love to do, and what's more, making the kind of music which they love.

Be sure to check back soon for the next review, which won't be Darkthrone, but might be dark.