#277 Diamond Head - Lightning to The Nations

I'm really knackered. That's not really relevant to this review, but if you espy any sentences which end in smiley faces or suddenly veer into entirely different avenues of context, you'll know why. Anyways, on to the main topic of the day; Diamond Head, and more specifically their début album,  "Lightning to the Nations", an undisputed classic of the NWOBHM, and an album which can be said, with only a little bit of hyperbole, to have influenced more or less every metal band conceivable. 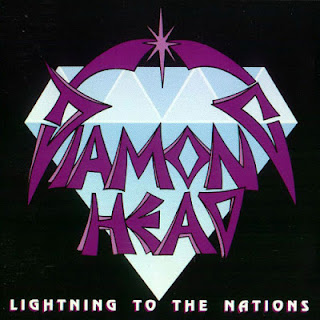 What you get in Lightning to the Nations is essentially solid-as-a-rock NWOBHM with a penchant for sex-noises during the solos, or at least, enough for me to decide to mention them. More important, however, is the former description; Solid as a rock. Lightning to the Nations really is one of those albums where either the filler is so good that we don't notice it's filler, or it's non-existent. You can't be sure, and either way the result is the same -  there isn't a single track on the album which I'd consider sub-par, through its whole length. Even the less famous tracks - for instance "Sweet and Innocent" are solid. A second observation about the record is that it's damn heavy. The chunky guitar tone really combines with the intense playing and rough, clattering production-values to create something which, while not quite "Welcome to Hell" by any stretch, really shows off a rough and raw edge which a lot of NWOBHM bands were more content to polish and shine their material. I can safely say I prefer the way Diamond Head did things - initially self-releasing the record, and evidently recording it on a lowish budget. The resultant record just has a genuine and very energetic feel which is extremely well preserved by the attitude with which the band created it; the same energy and enthusiasm seeps from it that you often pick up on similarly exciting records by artists who were really pushing the envelope; Kill 'Em All, Show No Mercy, even Burzum's self-titled shares a sort of exuberant and novel feel in the music - there's a certain sound which accompanies a record being utterly non-derivative, and Lightning to the Nations certainly has it.

Of all of the NWOHBM records I've lent my ear to, I think Lightning to the Nations is one of the most thrashy; certainly, the riffs and general style of the band was hugely influential to Metallica, and when you listen to them, you can see exactly where the influence lies. Songs like Am I Evil? are very, very proto-thrash indeed, in fact, as far as I'm concerned, when the first fast riff of the song kicks in, that's the sound that thrash being invented makes. The band certainly weren't afraid of a little breakneck speed, especially in tracks like "The Prince", which hurtle along quite fast even by today's standards. Certainly, the causal grindcore enthusiast might look at the riffs and tempo in the way someone designing a train today looks at Stevenson's Rocket, but at the same time, perhaps there's more than a little possibility that Diamond Head's speed was as influential as their playing, to the rest of the NWOBHM and well beyond. When you consider that, to my knowledge, Metallica have covered five of the seven songs on the record, you really get the scent of how influential Diamond Head were. Perhaps engaging a lot of hyperbole indeed, a journalist, I'm told, stated that "There are more good riffs in a single Diamond Head song than there are in the first four Black Sabbath albums". Maybe not quite, but there's certainly a degree of truth to the overall proclamation; Diamond Head's riffs are really good. I wouldn't go as far as he did - good lord no - but you just need to listen to a track or two to really soak up the monumental prowess of the riff work.


It's a bit of a sad story how rapidly Diamond Head declined after the first couple of records; sinking not so much into obscurity, but by all accounts mediocrity. It's much better to dwell on just how good this album is, however, than lamenting the fact that they didn't make many more like it. Lightning to the Nations is utterly deserving of a classic status, which, for the most part, it has rightfully claimed.