There is music from over ten minutes ago which is well worth listening to - contrary to what the mouth-breathing denizens of the world around me, who describe songs from 2010 as "an old one", might believe on the matter. Even us who weren't, like myself, alive at the time can nonetheless live the eighties music vicariously through the soundtrack of Vice City. Don't lie, that game was probably the biggest importer of glam-metal into our teenage lives. To cut a long story short, I'm going to review some Ratt tonight, for two reasons; firstly, my internet-connection is terminally ill and can't stream anything, and I have Ratt vinyl, and two, I genuinely enjoy their music. 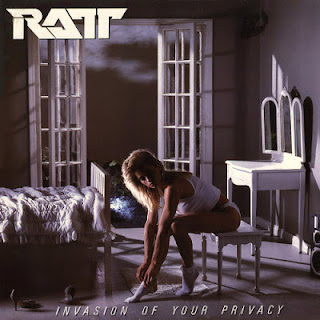 This review, I think, is going to be half-and-half a review explicitly of Invasion of Your Privacy, and a few general thoughts on glam in general. It's very beneficial that albums like this one do a very representative job of glam, and Invasion of Your Privacy really has it all. The record is typified by mid-tempo, crotch waving, swaggering and sugary simplistic tracks which provide the perfect backdrop to arriving at the party, seducing all of the unrealistically attractive and attainable supermodels present, driving them back home in an expensive sports-car, down a desert highway with the wind in your hair, and then screwing them afterwards, which, let's be honest, is more or less what listening to glam makes everyone think of. Probably cocaine as well. When it comes down to it, one of the fundamental reasons that I like glam is that it captures the reckless spirit of rock n' roll, and distills it into something even more catchy, sensual, and, dare I say, rather manufactured indeed. It's distorted, growling electric guitar dressed up in something leopard print, drinking cocktails instead of slaying dragons and invoking Satan, which is without a doubt what the "true" genres of metal were busying themselves with. Invasion of Your Privacy is a neon-lit exhibition into how fun a few riffs can be when they're stuck together with some massive choruses and more than a little ear for being memorable and catchy. Glam is the music which every party needs, but too few are equipped with. Safe to say, this album would be a great start.

As glam goes, Ratt manage to retain quite a lot of the metal element in the music, and the guitar sound and tone is certainly loud enough to exude energy and power, whilst being pleasantly hooky. The power chords tend to have a pleasingly hefty thump to them, albeit still very friendly to listen to; it's the kind of thing that nobody could complain about. The music then, unsurprisingly, is absoloutely not "intense" by anyone's standards; pleasantly plodding, and mostly in simple time signatures, albeit, and thank the lord, not quite to the extent AC/DC is. The tempo remains very uncompromisingly in the middle, which,  on the whole makes for something very relaxed and laid back, which is perhaps one of the fundamental features of Ratt's music; that is, being very mellow, not just with regards to being radio-friendly - bands like Motley Crue managed to play-fast whilst being very radio friendly indeed, instead, you get the impression that Ratt just aren't a fast band with regards to the sort of music they wrote; intrinsically mid-tempo, if you will. The sort of music which you always hope might come on the moment you walk into a nightclub. Sadly, I'd expect nowadays that an infestation of moustachioed bloody hipsters listening to glam ironically would really put me off. That, in fact, is something I really want to mention; I don't listen to glam ironically, that's why I don't particularly enjoy bands like Steel Panther, who do. I like glam for what glam is; and like the rest of metal, it's escapist music - it's just that when you listen to Invasion of your Privacy, you escape to the mid-eighties and a neon-lit night, instead of somewhere further away and darker.


I suppose it'll be back to something a little heavier next time I write a review, but before then, I think I'll dig out and listen to a few more of the Ratt LPs I've got somewhere, and I think I can safely say that it'll be worth it. In 2013, glam is, frankly, dead as a stone. In 1983 it wasn't, and just because it's not a thing any more doesn't mean it doesn't still kick-ass, thirty years down the line.