Toxic Holocaust were one of the very first thrash-bands I listened to, and ever since, I've been vaguely following what the man behind the band - Joel Grind - has been up to, inclusive of side-projects. Yellowgoat is one such project Joel Grind has recently worked on. I've been meaning to review the album since I discovered that it was on Bandcamp, and today, I've finally overcome the fact that my internet connection is spiralling down the plughole, and managed listened to it a few times. 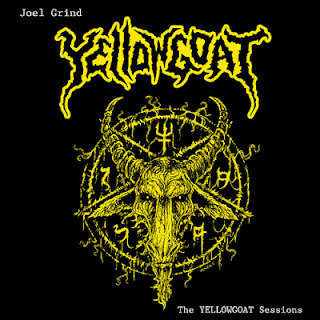 With Toxic Holocaust a fully-manned band now, despite starting as a one-man-project, I'm honesty not surprised that Joel Grind felt like a change. A break from the multi-member way of doing things can't be a bad thing, and I can well identify with the enjoyment of being in charge of every instrument. As far as I know, he plays everything on this record. While Toxic Holocaust has become something of a pure-thrash act in recent times, Yellowgoat is very much a visit to Joel Grind's musical roots; Ten tracks, including intro and outro, of unapologetically speedy, raucous Motörbathory. The tone, as it tends to be with Toxic Holocaust, is extremely old-school, and, of course, very deliberately so - the tone and productions sound vintage, which suits the music being played to a tee. It's a definite showcase that, while Toxic Holocaust are a bit cleaner than they used to be, Joel Grind can still deliver a scathing, filthy and blackened musical assault, with harsh vocals and roaring, crunching guitar which delivers a dual-payload of darkness and rock 'n roll swagger which wouldn't have sounded out of place in the 80's - many of these elements are in common with Bathory's self-titled début - it brought a dark satanic feel, but at the same time wasn't so far removed from it's rock n' rool roots, with melodic, swinging solos - something which Joel Grind shows more capability at on this record than ever before.

It's very clear, even before the "Yellow goat" reference to first-edition Bathory début vinyl, that Bathory is a huge influence upon the album as a whole, and there are certainly a truckload of well-crafted homages within the record - not least the memorable mid-tempo "epic" of the album, the four-minute long "Foul Spirit Within", which very much takes inspiration from "Enter the Eternal Fire" from Bathory's "Under the sign of the Black Mark" album, particularly with regards to the solo. The whole album the same agile, intricate and hooky single-guitar work which also characterised the whole of Bathory's début. I've always found Toxic Holocaust's earlier material, and now this, to be impressively cohesive for the work of one guy - the guitar is what Joel Grind seems to specialise in, but he's certainly capable with the drums and bass too, and the whole thing is solidly in-time and mixed together splendidly - It sounds like it could just as easily be a full band. The sound is thick, and the music feels extremely honest. It's clear that The Yellowgoat Sessions are more or less a showcase of Joel Grind having a bit of fun, but at the same time, they sound great, and frankly, that's what could be expected - I can't think of a better motive for making music.


All in all, while The Yellowgoat Sessions aren't necessarily Joel Grind's crusade to prove any points, or to make an album which will pulverise all opposition with innovation, at the same time, I think it's safe to say that they are a solid collection of Bathory worship, and anything which can be described in those words is fine by me.