Every now and again, as you'll probably have realised if you read a few reviews, I suddenly realise that I haven't yet looked at one of the biggest names in the genre. Today is one of those days, and I feel the sudden and definite need to amend it, especially considering the artist in this instance is the late great Ronnie James Dio. The album I've chosen to do a review of is predictable enough - Holy Diver, because, I must confess, I'm one of those people who has it sitting on the shelf, and hasn't listened to either in ages, which too is something I feel the need to amend. 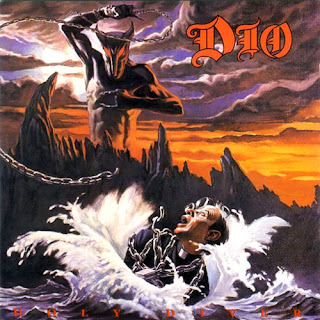 There's really not much question of my giving this album a negative review. Of course, I'm flawed in that I'm never prone to doing that anyway, but this album in particular is very much a flagship album of metal as a whole - an album composed almost entirely of songs which are classics in their own right. It's certainly nothing short of iconic, and solid for it's entire running-time, which begs the question, what's the secret recipe? What is it that makes the album so great? I have a few observations on the matter, many of which are self evident in the music. Holy Diver is, first and foremost, and album which really brings solid structure into play, particularly lyrically and vocally; Dio's vocals not only bring a huge degree of passion and energy into the music, particularly by the standards of 1983, the albums release year, but also provide a great number of hooks and structures which make the songs distinct and utterly memorable - not only are the choruses monumental, but so are the verses, certainly a step above quite a lot of traditional metal in terms of being consistently solid throughout the whole album - there isn't a single vocal section which isn't in the position to be the crescendo of the song, were it not cancelled out by the fact that all of the others were equally virtuosic.

It would be foolish to conclude, however, that Holy Diver is an album made by its vocals. Vocal icon that Dio was, there is plenty of other talent on the record, with infections and utterly quintessential heavy metal riffs and manic, but smooth-flowing solos. The whole guitar department has plenty of crunch and swagger. The album's riffs have, to me at least, equal iconic standing with the vocals, and certainly give the songs a similar degree of direction and distinctiveness - Holy Diver certainly doesn't quite sound like any of the other heavy metal albums of 1983, and it's all the better for it. The percussion on the album comes in a style that you don't really get any more - very level, refined and quite light. I get the impression that Vinny Appice is the kind of drummer who played the snare by holding the stick from below, not above, as most drummers do today, which really gives the drumming a tight, restrained and slightly clattering sound which is generally not replicated in modern metal. Holistically, above the sum of all of the albums musical parts, it is an extremely diverse creature, and very much an album which offers a bit of everything. Other classics, such as Screaming for Vengeance or Number of the Beast have the same air to them - they don't offer an album of utterly similar tracks, but instead very different tracks, which still feel like they belong together; fast, slow, epic or ballsy, Holy Diver really offers the lot on a plate.


For the last couple of days, I've definitely been in the mood to listen to some Dio, and doing so really has refreshed my memory of just how good albums like Holy Diver are - albums which were somewhat lost in my mind among the fog of albums which I don't listen to particularly often. It's good to see it clearly for a change.