I initially discovered Master last year, but it is this month that an enjoyment of the band's sound has genuinely come to fruition. One of death metals more underground and turbulently spawned, but also stalwart, and deeply respected bands, Master have always sounded unique among their musical peers, and at times their speed and aggression is absolutely unparalleled. Uniqueness, of course, can single out many-a-band to be of great interest, and Master are no exception. 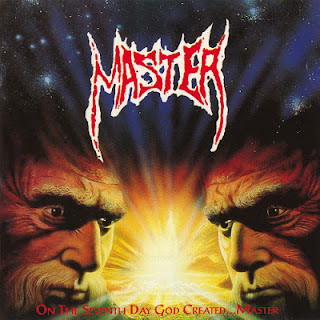 I often say that the first moments of an album can really set the tone for the rest of the work perfectly. It is, in fact, something I've said often enough to notice doing so, which almost certainly means I say it far too often. Forgive me. The opening seconds of "On the Seventh Day..." are a frenzied flurry of thunderous and breakneck drumming and churning, titanic guitar. The rest of the album is, pleasingly, much the same. Master's strain of death metal is, as far as my limited knowledge of the genre allows me to speculate, bloody heavy, even by today's standards. Even more so for the unsuspecting early nineties which the album was unleashed upon. The combination of viciously speedy drums, and memorable, crushing, slightly punk-edged riffs is a good one, and certainly makes for an album which absolutely explosive - Each and every song is a cauldron of thunder and heaviness, competently conjured at a variety of tempos. The faster sections, where the double-kick drumming reaches genuinely impressive speeds are a particular signature of the record, and all things considered, the percussion practically dominates a large swathe of the album, particularly to me - as a drummer, I can safely say that there are many things done on this album in terms of drumming which would leave me with no legs.

That's not to say, of course, that the drums are the only point truly worth of mention. There's far more; The guitar tone is top-notch - thick, enveloping and ominous, but still with a lot of bite and crunch, which is very much what I enjoy in death-metal. There's a good degree of technical playing too, and quite a balanced amount at that - enough to be appreciable, but not to oversaturate the album, both in terms of the riffs and the solos, the latter of which are really well showcased and have a superb ringing sound. They don't show up super-often, and perhaps they aren't the main aim of the music by any standards, but I can safely say they seem great death-metal solos to me, and certainly compliment the songs - not in the slightest bit shoehorned in. The vocals are definitely another feature of the record which stand out - ranging from a powerful roaring growl to what one might expect to hear if Venom had had a shot at making death-metal. Combined, all of these elements come together to create a fantastically energetic, memorable and fist-pumping death-metal assault. One of the keys to this, as far as my ears tell me, is the sheer rhythmic strength of the albums music - The structure of the songs, particularly the vocals and lyrics, are extremely tight, and really help the music to be come explosive, but at the same time compact, and very laden with memorable hooks.


Based on what I've been listening to so far this year, it looks like 2013 is going to be a death metal year. I'm quite delighted to be beginning to understand the genre properly. What better way to start than with one of the genres classics - one which an enthusiast for the genre should ignore at their own peril.