Black-thrash has, for quite a long time now, been a genre I've greatly enjoyed, and there are many albums I have encountered as I trawl through the internet looking for more to listen to. Old, from Germany, were one such band I encountered, and I promptly bought the 2006 début album, excellently titled "Down with the Nails". The band, apparently, are on hold now, but that certainly hasn't stopped me enjoying the album, and indeed reviewing it. 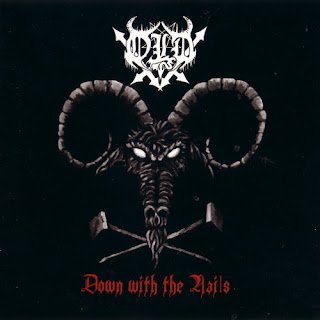 I've said it before, I think, but one of my favourite things about black-thrash as a genre is the sheer variety of directions in which it can go. Down with the Nails is an interesting album from the onset, and it was very much clear that it was a little different to the other, mainly metal-punk influenced black-thrash I'd been listening to of late. Down with the Nails is very Celtic Frost and Hellhammer influenced in places with very chord-based, "solid-block" riffs and a thrashy sound, in places in a similar tone. At the same time however, the music is dark and immense, reverb-laden shadow cast by the chords being hit. The album's tone works very well in this context, with filthy and extremely raw production and guitar tone creating a very gnarled record, with an acidity and intensity in many places more reminiscent of conventional black-metal than black-thrash. The album seems, to my ears, to share a hectic and bone-crushing intensity with releases such as Mayhem's Deathcrush EP, or early Gorgoroth, particularly with regards to the riffs. In many respects, there could be ground for considering the album to be very riff-driven black-metal, as opposed to pure black-thrash, if you chose to argue it that way.  Particularly when one accounts for how willing the band seem to be to explore the darkness and rolling gloom which can be unleashed by reducing the tempo somewhat.

Down with the Nails is certainly an album which brings to the fore the ice, wrath and demonic energy of black-metal to the fullest in the mixture of elements, but on the other hand, in direct contrast, there is still a real feeling of rock embedded deeply into the album too. Most interestingly, it is mixed in surprisingly well with the majesty and acrid seriousness of the black-metal side, without being jarring.  I'm not sure how the band make it work in quite the way that it does, but they certainly do succeed. It's an interesting cocktail - one mixed to ratios that I've never heard a band mix black metal and thrash together with before, and consequently, very interesting to listen to, on top of already sounding great.  Scattered interspersions of d-beats and slightly more merry and ballsy sounding riffs really take the music in a different direction at times, while, admirably, not making it seem alien to the flow of the album. It's fist-pumping, but at the same time scathing, militant and dark, with evil guitar-work tumbling, as if through some rift to hell. To distil what I've said in almost two paragraphs into a single sentence, Down with the Nails is the best of both worlds - A really solid coming together of all of the elements which can make black-thrash fantastic.


I'm not sure what the individual band-members have planned, but if Old ever start to produce material again, I'd be greatly interested. As it is, Down with the Nails is a splendid stand-alone black-thrash album, and certainly one which grabs my attention above and beyond the normal level.