#240 Ataraxy - Revelations of the Ethereal

For me, 2012's death metal was dominated not so much by the stalwarts and veterans of the genre, but instead by a slew of début full lengths by artists in what seems to be a renaissance of old-school death metal by young bands. Before new-year, I'd already taken a look at Binah and Horrendous, two of the bands synonymous with the movement, but there are certainly more bands than simply those two - The third such 2012 début to come to my attention was Spanish band Ataraxy, and their album Revelations of the Ethereal. 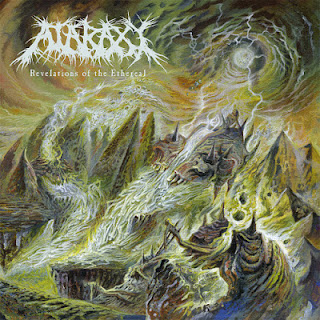 Like the two former bands I mention - Binah and Horrendous - Ataraxy's sound is murky, dark and sinister. Old-school perhaps, but certainly not tired or overused. Like the artwork suggests, the music takes the listener on a twisted, other-worldly journey through the occult, the bizarre, and at times the Lovecraftian. Monstrous, heavy riffs plod along like cyclopean denizens of the deep, wreathed in creepy and highly atmospheric lead work. The band tend to explore a slower tempo than your average death metal album, but it seems to be done to great effect, especially complimenting the albums murk and crushing force of the album. That's not to say that the band never use faster tempos, however. There are plenty of parts where the riffs kick-up the dust a little, and burst into a higher tempo, whilst retaining the dark, brooding feel which the slow-tempo sections capture extremely well. The whole sound-scape conjured by the music is of something huge and eldrich, lumbering out of the sea, still covered in seaweed, runes, and with an aura of darkness, which seems to be something which it holds in common with other recent old-school death-metal influenced débuts, which really grasps my interest, considering the possibility that the collection of bands responsible might really be carving out their own niche stylistically.

Revelations of the Ethereal carries a tangible weight with it's music, which is always something good to hear - All of the eerie, strained lead-notes feel bursting to the brim with atmosphere, and the crunching, pulsating tremolo riffs are as crushing and hefty as those of any other band I can bring to mind. The intros to the songs, particularly, are very strongly laced with the subterranean malice and twisting psychedelia and reeling immersion which the songs as a whole flow with. The album is absolutely one which draws the listener in, and at times feels inescapable - one of those albums which you hear and can't help but rock back and forth a little in your chair, sort of mesmerised. After all, this isn't your average, punchy death metal, but a darker, more convoluted and thick - the kind of death metal which sets to action your mind, and not your body. The variety of tones, sounds and the enveloping atmosphere really makes you want to hear the music, to understand it and hear it completely.  "Ataractic" means something akin to a drug which causes a tranquilising effect, and in this respect, the name Ataraxy fits the band rather well - despite the music's superb intensity, it also lends itself to thinking, pondering, and being utterly absorbed in the soundscape it creates - While some music creates movement and energy, Ataraxy also creates a mental place.


This is definitely as solid a début as any I heard in the whole of 2012, and I can safely say that it has everything which I enjoy in such an album; A feeling of flow, completeness, great songs, and to top it off, fantastic artwork. I can see this band, along with the other bands I've mentioned in this review, going extremely far, and doing great things, if they keep making music which is this good.