I've certainly been on something of a traditional-metal kick in the last few months, although it hasn't shown hugely in my reviews. In fact, I'm a little frustrated about how little reviewing I've been doing over all. To continue to remedy both of the above facts, I'm taking a look at British traditional metal outfit Dark Forest, who released their second album, and the one I'm examining in particular, on Cruz Del Sur music in 2011. Cruz Del Sur are a label I tend to be interested in, and have, over the years, demonstrated a tendency to back really good bands. 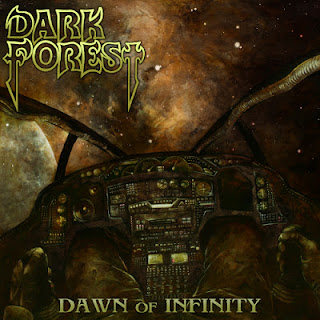 Traditional metal bands who have formed more recently, Dark Forest included, generally have two options; they can play traditional metal very overtly, or they can just happen to be a band who play traditional metal. Where many bands post millennium are very much the former, it's safe to say that Dark Forest are more the latter. The band sound more down-to-earth, modest and earthy than some, and certainly have more of a timeless quality to their music than one which is overtly retro - you really get the idea that the band are playing traditional metal because that's what came out of their instruments when they had their first jam, as opposed to anyone in the pub going "So... let's start a traditional metal band". Reflecting this, the lyrical themes manage to avoid the overused "metal is so fucking great" template, and actually have some narrative, telling of everything from fantasy to science fiction to something altogether more spiritual. The albums title "Dawn of Infinity" really rounds up the songs into a coherent work, in the way that bands like Iron Maiden manage to do - there aren't many Maiden albums which aren't "about something" - and this is also true of Dawn of Infinity - the album seems, for the most part, to have direction. I don't tend to pay much attention to lyrical themes - I am, in fact, quite a poor reviewer in that sense, but I was immediately taken by Dawn of Infinity's diverse themes - it really gives the album some depth and leads to an altogether more dynamic and well-rounded record than many I've listened to - it certainly feels like the band spend some time on their lyrics and themes.

Talking of dynamic, it's safe to say that this is also true of the rest of the album; the album manages to go through so many of the places explored by traditional metal, and very seldom gets tiresome or repetitive - crisp riffs are brought out from every angle, and embellished with all kinda of lead guitar. As with the lyrics, you get the impression that a lot of genuine care is poured into making the songs, and the memorably hooks, fantastic choruses and vocal lines, and rumbling riffs are really a testament to this. Every song has something good about it, some section which makes you go "yeah, that's what it's all about", and I have to emphasise my admiration for this - it really says something about the solidity of the record. The vocals also really give the album some more of the character which it really hands out to the listener. Absent is any of the pomposity or theatrical trinkets of excessively operatic power metal, and in their place a very talented but at the same time very manly frontman - delivering the sort of vocals you might expect from Blaze Bayley on a particularly good day. Consequently, what you get is a traditional metal record which really doesn't arse around - it gets straight to the point, and stays on course for it's whole running time. It's talented, solid, and thoroughly old-school, but at the same time succeeds in being fresh, and non-derivative.


Ultimately, between the riffs which soar, reverberate, trundle and otherwise propel themselves through the soundscape, and the dips, swirls and crescendos of atmosphere, and the memorable vocal lines,  there is really no time to get bored of the album - I for one found myself far too busy enjoying it, and I'd recommend it to any traditional-metal enthusiast.