Whilst the album of the year poll is somewhat in the spotlight, so to speak, it's never a bad time to review an album which is older - especially if I feel I aught to listen to it. With this in mind, I decided to review Thy Mighty Contract, the début full length album by Greek band Rotting Christ. While the album is an undisputed classic of the black-metal genre, I've not had the presence of mind (or perhaps sense) to listen to it before now. I had no idea what to expect. 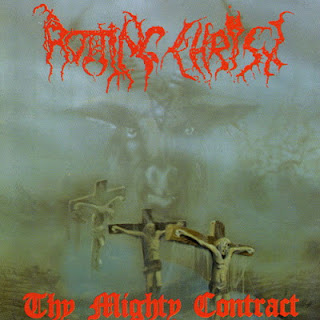 The album was released in 1993, a time when black-metal hadn't quite settled upon a signature sound yet, especially among bands on the peripheral of the scene, Rotting Christ being a prime example. This almost certainly lead to many interesting interpretations of the genre's sound, and "Thy Mighty Contract" is one such interpretation. The album has an epic atmosphere, which I wasn't expecting, and one which isn't carried along chiefly by tremolos and distortion, as would become the convention. The album is instead extremely riff-driven, with casts a refreshed light upon what black-metal can do. Eerie, occult guitar work, really emphasising individual chords in the form of dynamic riffs gives the album a dark but at the same time soaring atmosphere, the kind of majesty which I really enjoy in black metal; dark, evil, but also very grandiose. Another thing I didn't expect to appear was synth, but the album has quite a bit here and there - not enough to classify as "symphonic" perhaps, which is good, as too much synth can spoil a great album, but definitely enough for it to be noticeable, and work really well, adding to the beauty of the record, while being used sparingly enough to feel "valuable" - definitely making an impact when it appears, and giving the music a scale which not every black-metal band can reach. "Thy Mighty Contract" feels vast and powerful.

Another thing which the album handles well are solos and melodies, the former of  which are, it has to be said, something of a rarity in black-metal. "Thy Mighty Contract" boasts a couple, however, and they certainly don't do any harm to the atmosphere; adding the occasional victorious moment to an album which already has more than a little hellish triumph in its sound, in the epic and infinitely memorable melodies. Reconciling the epic, and admittedly at times not-so-very-dark side of the album with the evil edge of their themes, and more generally, black-metal is, in theory, a tricky job, but the band seem to manage successfully. All in all, it has to be said that the album feels organic, but at the same time very professional - contrary to some of the bands around at the time, Rotting Christ were tight musicians, and it certainly shows - the whole thing has a strong air of competence, both in terms of musicianship and well rounded production. While the album may not be as cold or vicious as the necrosound coming out of Norway at the time, the infernal darkness was certainly present in some form - there's no denying that the album is dark music in a true sense, it's just that it's not the crushing, devious persuasion of darkness. Albums like Under a Funeral Moon, by Darkthrone, and released in the same year were invocations, but Thy Mighty Contract is more a victory march forth from the gates of hell, and into the land of the living.


I can safely say that I should have listened to Rotting Christ sooner. Once again, writing reviews has lead me to encounter a band that I'm genuinely excited at the prospect of getting into. The album is solid, memorable and unique. What more could anyone want?