I don't exaggerate when I say that Vader are a band I've been meaning to review for a long time. There's never a very good reason why I haven't done so, and this review is no exception - I should probably have reviewed it long ago. The other day, however, Vader came up on shuffle, and I nearly spontaneously combusted remembering how powerful they are as a band, and I knew I'd be doing a review soon. 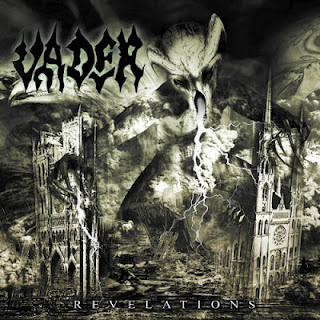 One of the important things to know when approaching Vader having never listened to it before, is that they are a bit different from the average death-metal bands which they arose at the same time as. First of, and this album is no exception, Vader are one of the more punishing bands around. Revelations is filled to the brim with furious energy, with buzz-saw riffs of a tempo which you have to hear to believe. The speed and aggression of Vader is one of the bands trademarks, and is certainly well exhibited on this album, which, at about half-an-hour in length, is a swift barrage, as opposed to a prolonged one. That's not to say that the album lacks content, however - it's just that it's at about twice the tempo most of the death-metal I listen to is, and what's more, the band haven't been afraid to let a song be short, instead of drawing it out to a greater length, which is admirable, and works well, despite making the album seem to be over very shortly after it has begun, albeit managing to cram a huge amount of utter ferocity into that time. As I've already said, the band's energy is extremely impressive, and the combination of riffs which genuinely ooze with fist pumping, teeth-clenching and convulsing energy really make you feel their presence when they roar - backed by uncompromisingly tight and insanely physical sounding blast-beats, double-kick drumming and all-round tight, appropriate and fanatical percussion.

Adding to the colossal feel of the band are Peter's vocals, which really compliment the power of the instruments. Instantly recognisable, the roars and growls sound like they might be coming from a man whose about 8ft tall at the very least. I'd certainly class them with the most recognisable vocals in death-metal, along with the likes of Martin Van Drunen and Dave Ingram. The vocals really set Vader apart from any other band I can think of, with a truly demonic, omnipotent sound to them, perhaps partly through effects, but at the same time, I get the feeling a lot of it is entirely natural, adding to what is already quite a unique recipe for death-metal. Another point of interest is how thrashy Vader are - more so than most, and certainly in a different way to the manner in which most bands would incorporate it into their sound - I've often heard thrashy death-metal which is grubby and grimy incorporated into death-metal, but what Vader do on Revelations is take the razor-sharp aspects of the genre, and create something piercing and razor-sharp. This really echoes the overall feel which I always get of the album - that is, Revelations is an album about precision and energy, and it provides both by the truckload.


Ultimately, I'm of the opinion that Vader are a band who unleash tightly-played but incredibly energetic death metal in the right way - it flows well, and it's quite memorable, but at the same time manages to be technical, unrelenting and compact.