Leeches of Lore are quite possibly one of the most bizarre and unorthodox metal-bands to come up in the last decade, so it certainly grabbed my interest to be presented with Tenderizor - a band containing one of their members. I had no idea what the band's label; "Noise thrash" was going to be about, but I can safely say I found out in a lesson that consisted in about eight tracks of speaker destroying fury. 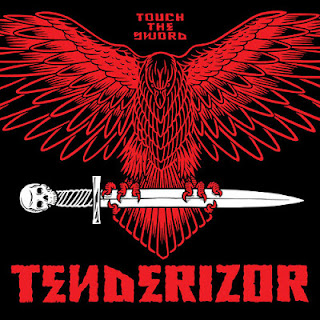 It's nice when a band sound like their name, and Tenderizor lives up to theirs quite well, in the sense that the music is something very hard and robust, which proceeds to beat you to a pulp. Fortunately, the pulp that the music renders you is a musically pleased one.  As it turns out, the term "noise-thrash" is pretty much exactly what the words in it might suggest. The music is thrashy, and absurdly chunky. I didn't realise that bands could have producton which was so brick-walled but at the same time tasteful; the sound levels can only be described as decimating - while not carrying the sort of crushing but clear heaviness some bands do, but instead a grainy, hugely amplified scream of instruments being played as loudly as they can, loud enough, in fact, to make them sound not quite as they should. If I were to take a copious amount of bath-salts and start to eat concrete-blocks, it would still be less crunchy than some of the moments on this record - the music absolutely roars, and casts an alternative light on what are otherwise vaguely conventional riffs, making them thunderous and unique-sounding. There's really only one way to describe it, and that is noisy. The album exudes sound-waves which batter and bruise whatever hardware they are being played through, with a tone which is dry, harsh, and unforgiving, but at the same time, very enjoyable to listen to.

Fortunately, juxtaposed with cases in which such loud and rough production doesn't work, the album is far from just noise and distortion - There's a lot going on. As soon as the first vocals are heard, it becomes instantly recognisable which member of Leeches of Lore is in the band - the vocalist, whose style is similar in Tenderizor, but as far as I'm aware, unique. There are interesting melodies and harmonies all over the album, too, which remind me of Leeches of Lore, albeit generally more metal-purist. Like the aforementioned band, however, "Touch the Sword" is an album which has very clearly been written by people who like to think outside of the box with their song-writing, and while the record can largely be described as thrash, it's without a doubt one of the most unique thrash albums I've listened to in quite a while. What's more, for it's length, it certainly asserts itself in terms of content, with a generous serving of variety, with songs which are both solidly thrash-based, and others which clearly go down a more vague, less genre constrained road. Ultimately, the balance between the two is pleasant and there's certainly not too much of one or other. The album's thrash side is bolstered by the fact that it's monumental loudness can blow you away like a leaf, but at the same time, the loud, distorted character makes a place for atmosphere that a similar album, if produced, recorded, and played very differently might not manage to have.


Once again, I find myself reviewing an album which doesn't quite sound like anything else I've listened to. There's always something quite pleasing about doing so, particularly if it's an enjoyable album in its own right, which, I think I can trust myself to say "Touch the Sword" was. Anyhow, I'm off to the shop to buy painkillers to give to my speakers.