I've quite enjoyed Varg's post-prison albums, but on a grander scale, the metal community doesn't have a very definite consensus on the matter. Helpfully, Varg is releasing albums with a quite impressive frequency, an incentive for us to make our minds up. The latest of these is Umskiptar, his third album in as many years. 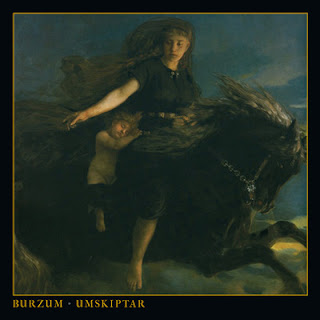 Whether or not you consider him a complete mental-case, Varg does possess a good mind, and often directs it effectively into his music. Yes, certainly Burzum can be considered to have peak albums and trough albums, but I've never encountered a Burzum album which didn't feel to an extent "thought through". Umskiptar seems to be no exception, and the characteristics of the last two albums are continued, expanded upon and developed to varying degrees. In character, the album feels more mythological in essence than it's predecessors, and seems to be somewhat more overtly Viking, if only by a small degree, perhaps accentuated by the more "medieval" sound which a number of the songs seem to possess. There is also a slightly more "epic" feel in the music, albeit not the same as keyboard-laden albums like "Hvis Lyset Tar Oss". Something more akin to an Enslaved-esque soft-voiced Norse feel is present in many of the songs, and Varg has continued to deploy clean vocals, more so than in "Fallen".

A lot of the album's material manages to juxtapose the uniqueness of the material which Varg manages to write with a conventional feel - it's certainly still black-metal, as recognisable from "back in the day", which is only natural, considering that Varg is a man who very much helped to establish the genre at that time, but at the same time, it manages what Burzum consistently manages; to be simply different. A lot of Burzum's material is noticeably hypnotic and repetitive, often effectively so, but the repetition on this album is quite prominent, perhaps a little above most of Burzum's back catalogue. I'm a bit on the fence about whether it works as well as usual on this record, but while I'm constantly noticing it, it hasn't been annoying. Perhaps it slightly limits the album to a specific mood and style, but it certainly doesn't make it bad; a little uneventful in places due to it's simplicity or minimalism, but not really bad at all. It's the sort of album which will definitely take me a couple of listens more to form a fully-functional opinion of, but the album album already feels a bit  more solid than my initial impressions suggested.


Umskiptar definitely has filler here and there, but  the album also boasts some very enjoyable tracks, and in my mind, that outweights the vague mundanity of the filler, when it crops up. As far as I'm concerned, Varg has made another fairly robust album, and that's enough for me.