I've know of Electric Wizard for a long, long time, but I discovered them last night, when I listened to Supercoven. Dopethrone seemed the album to take a look at to get started with the band, and I feel like I'm about to take a sonic journey which me, and my speakers, may never be the same again in light of. Time slowed down, the walls closed in cosily, and then my mind left my body and had an adventure... 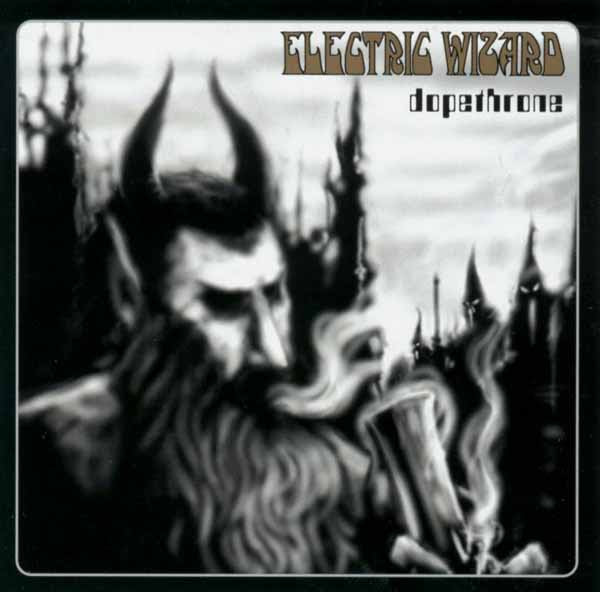 The bearded, horned, distinctly wizardly character, smoking a bong, portrayed on the albums cover art really sums up the band's sound far better than I possibly could; Dark, hypnotic, crushing, and very, very stoned. The throbbing lower end which accompanies the whole album is immensely mind-altering, and immediately takes you to a place which is unlike the sane, rational and euclidean one you were just in - a psychedelic, slow-motion world, tumbling over and over through the soundscape. I'll add, at this point, that I could review the album in a less kaleidoscopic manner, but the sheer weight of bass pressing down on my brain is very much encouraging me to go down an abstract path. The riffs which pulse through the album are catchier than I initially expected, and many of them are extremely memorable, with a real prospect of addictiveness beyond the albums initial perception-bending qualities, which really stands in it's favour. The feel of the whole album is very genuine and earthy in that respect - it's an album which you want to chuck in the CD player and experience. I've never heard, and I exaggerate not, anything quite as enveloping as this - the feeling of transcendence which accompanies every reverberating note is like an inescapable whirlpool in the ether.

The album as a whole feels like a cocoon, and certainly transported me away from my normal state of mind - Electric Wizard don't seem to be capable of being background music, and my attention was held by the whole album - I almost physically couldn't become distracted from it, and even writing the review was difficult, so thoroughly caught in the music's gravity I was. The delirium which accompanies the whole album is utterly ensnaring, with the ethereal vocals coming at you through a sea of incredible tone, which enshrouds everything like a thick fog. The atmosphere seems ambivalent in places, and certainly varies throughout the album, with some songs feeling warm, whilst others feel cold, almost sinister in places, but even then, still very slow in terms of feeling, as well as just tempo.


When the album finished, the entire world felt too quiet. Coming back out of an album like this is as interesting an experience as going into one, and I may have predicted right when I described the album as a musical journey. I'll end this with the only phrase which I can think of; Fucking hell.

This is a 9/10, easily. It's an amazing album, and I'm definitely going to listen to more.